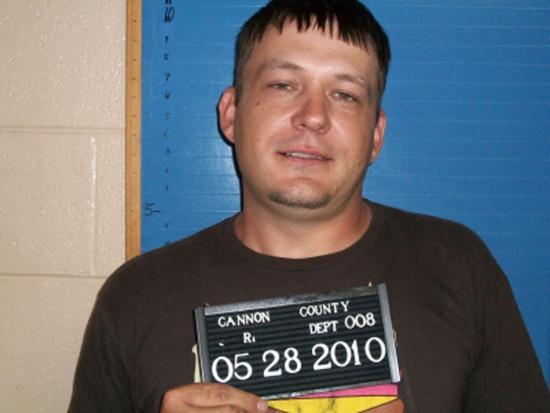 Cannon County Sheriff's Deputy Anthony Young was dispatched to 2341 Iconium Rd., Woodbury, on May 28. Upon arrival he spoke with Roy Hall, who stated that someone in a cream-colored small pickup had driven into his driveway and stolen a campaign sign for Sheriff Billy Nichols out of his yard.

Young learned that Sheriff Nichols had located the pickup in question and had asked the driver to go to 2341 Iconium Rd. so that Hall could identify them as the persons he had seen earlier. The woman who was the passenger in the pickup was identified by Wanda Hall as the person who had taken the sign. The pickup was also identified as the vehicle that had been used in the theft. Mrs. Hall stated she was certain of her identity of the woman who took the sign because of her hairstyle and color and because of the blouse she was wearing.

Young then went to the truck to get information from the driver and passenger. The driver was Corey McNeese and the passenger Lindsey Farless, each of whom gave their address as 1695 Iconium Rd., Woodbury. Young obtained statements from both.

Young then placed Lindsey Farless under arrest for Theft Under $500 T.C.A. 39-14-146 and for Criminal Trespass T.C.A. 39-014-405. She was transported to the Cannon County Jail, booked, and later released on bond. Young also obtained warrants for Corey McNeese for the same offenses and when he came to the jail to see if he could bond out Farless he was placed under arrest. He too was booked and later released.

During the course of the investigation Young spoke with Ms. Farless' mother, Stacey Sargent. She stated her daughter and McNeese told her that they were going to take the signs and put them in CJ's yard as a practical joke because he (CJ) did not like Sheriff Nichols. Sargent informed Young that CJ's last name was Johnson and that he had done work on McNeese's vehicle.

The place where the signs were located was at Charles Johnson's repair shop on Soloman Lane. Young went to Soloman Lane and made contact with Charles Johnson and asked him if he knew anything about the signs. Young observed three "Vote for Billy Nichols" signs and one Woody Auto Express sign that were put up in the lane leading to the repair shop. Johnson stated he thought someone had put them on his property as a joke. Young told Johnson he was going to take the signs and return them to their rightful owners.

Print
Members Opinions:
chirlston
[Delete]
It's okay to steel Young's, Pratter's, and other signs, but the sherriff's department goes into overtime to search for Nichol's signs. okay
dugginator
[Delete]
It makes me safe to know that our sheriff is out patrolling his campaign signs. This is stupid.
[Delete]
It's good to know that when our Sherriff's Dept is called....they do respond, for whatever the reason. A point both earlier posters choose to overlook.
annonomoose
[Delete]
sounds a bit like overkill to me.I feel much safer now that these obviously hardened criminals have been arrested and taken off the streets.I believe if the hostages(signs) were returned unharmed,and an act of contrition(apology) was made,I would be content.After all,I was a young kid a long time ago,and so were you!But I guess SOMEPEOPLE think having these young people put in JAIL,with a criminal record,further tying up the legal system,is just fine and dandy.What they did was WRONG,no doubt...but arresting them???Let he who is without sin cast the first stone.YEEEEHAAAAA!!!!life goes on in shotgun county!
JrWtn
[Delete]
It's amazing how fast two arrests are made for stealing BILLY NICHOLS OWN SIGNS. What an obvious spectacle of a conflict of interest for the sheriff to pull over people for stealing HIS SIGNS, especially considering the high crime rate in the county. Normally you never see the sheriff. Looks like one of the dumbest moves I've ever seen. Our homes may not be protected by the sheriff but his campaign signs sure are!!!!! I am very upset!
JohnnyRingo
[Delete]
Lindsey is really cute in her mug shot.
fancytenn
[Delete]
A real over reaction to kids doing something silly. Lets give them a criminal record over some cheap election signs. It's funny that no other theft in the county is solved but they really wasted taxpayers dollars tracking this offense down! I was unsure of my vote until now but I have made a decision. Maybe the next sheriff can use common sense when it comes to law enforcement.
CannonCourier
[Delete]
Following are clarifications to this report:

1) A crime was committed.

2) Citizens witnessed the crime as it was being committed.

3) Citizens reported the crime to the law enforcement agency which provides service to the area in which they live.

5) A judge and/or jury will determine guilt and punishment of the persons charged, should they not enter a plea of guilty.

Reading
[Delete]
Roy and Wanda Hall was stupid for even calling the police over this matter. Kids will be kids...........guess their child never did any wrong........or maybe their perfect too. You can't fix stupid
[Delete]
I wonder why, to some people, that it's okay for kids to commit crimes just because they are kids. Throw the book at them.
[Delete]
Everyone keeps saying kids will be kids....McNeese is in his 30's, far from being a child and Farless looks old enough to know better herself. It's not a hard core crime but wrong is wrong.
lilrook
[Delete]
damn shes hot