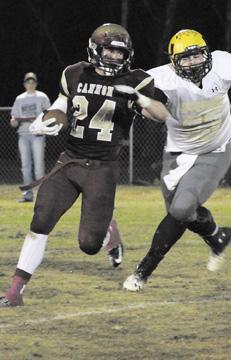 Cannon County saw its 2013 season end following a 48-12 setback against No. 3 Upperman at Schwartz Field Friday.

The Lions finished the season with a 1-9 mark, which is one more win than they had the previous two seasons combined. They also ended a 22-game losing streak during the campaign.

“We would have liked to won more, sure, but I believe we saw some improvements and there is a foundation to build upon,” Daniel said. “We will miss our seniors but I believe they provided the type of leadership the remainder of the young players can learn from moving forward.

“We need to have a strong offseason and build going into next year.”

The Lions fell behind early as Upperman jumped out to a 21-0 first-quarter lead; however, Cannon County did put upa fight and had its highest scoring output since its 28-26 win at Red Boiling Springs.