New West Side Principal Returns To Her Roots 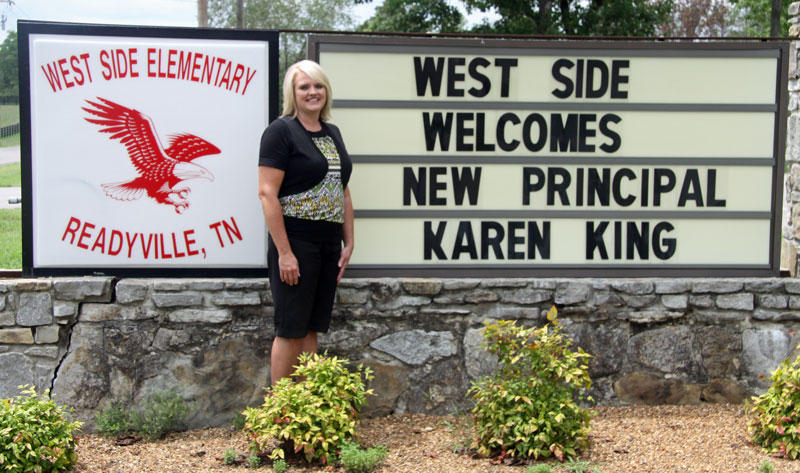 Karen King is going back to her roots and continuing a family tradition.

King attended West Side Elementary as a student and a member of her family has either attended or worked at the school all but two years since it opened in1959. Two of her daughters, Taylor and Autumn, attended West Side and youngest daughter Addie will begin kindergarten there this year.

King’s mother, Grace Todd, retired from teaching at West Side in 1976. King spent 16 years there as a teacher.

“I’m excited to be back and there are people here that where here when I was before,” King said. “I just hope I can continue to lead (West Side) and make it the good school it always has been. I want to continue the tradition of excellence here.”

It is a good thing King knows the surroundings because she will have little time to become acclimated with the start of school just around the corner, Aug. 7. The vacancy created at East Side has not yet been filled. The position is posted on the Cannon County Board of Education Web Site.

King believes the transition to West Side will be easier than when she was appointed principal at East Side in 2008.

“I think it will be an easier transition just having the experience of being a principal,” King said. “East Side has been a great experience for me and I have learned a lot of things there about being an administrator. I do already know the faculty (at West Side) and that will give me a head start about which direction to head and so forth.”

In an attempt to get a head start on goals and direction, King already has provided all faculty members with questionnaires.

“I like input from the faculty,” King said. “I will take that questionnaire and use their answers to lead me in the goals I am going to set. I feel like if we are all on board going the same direction there will be more buy-in. I’ve also been looking at test scores, stats and data.”

Though King is excited to return to West Side, she does so with somewhat mixed emotions created by leaving behind faculty, staff and students at East Side.

“I have a heart for West Side,” King said. “I went to school here, I taught here and my children have been here. I have a vested interest in the West Side community; however, East Side took me in and made me family. I still feel a part of that community. They took a huge leap of faith in allowing me to become part of that. I also definitely have heart for West Side and want to see it succeed.”

Print
Members Opinions:
nasrville
[Delete]
Welcome home Karen, best of luck to you. You will do GREAT!
honeymooner1978
[Delete]
You were great in East Side, an encouragement to teachers at the High School, even visiting students you cared about at the Alternative School and are an EXCELLENT example of dedication and a true asset to any School you are associated with!!! Congratulations to West Side ! They are truly getting a gem!
Copyright © and Trademark ™ The Cannon Courier 2017 All Rights Reserved
Copyright Statement | Privacy Statement | Terms of Service
Woodbury TN
Copyright © 2013 by The Cannon Courier
Powered by Bondware
News Publishing Software