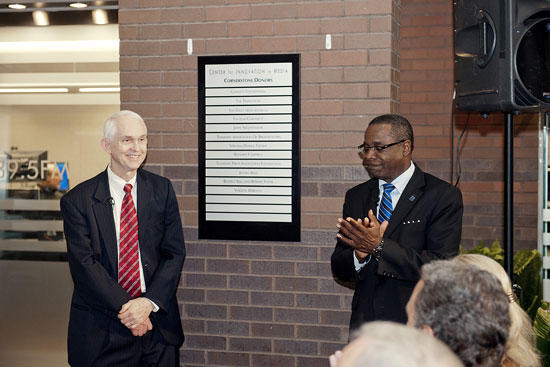 College of Mass Communications Dean Roy Moore, left, smiles as MTSU President Sidney A. McPhee the unveiling of a plaque with the names of Cornerstone Donors during the Center for Innovation in Media's grand opening. (Photo by Andy Heidt)
MURFREESBORO — Students, faculty, guests and reporters converged on a media event April 12 in one of the most appropriate places on MTSU’s campus: the new Center for Innovation in Media.

“This new center reflects the new world of media convergence,” said MTSU President Sidney A. McPhee. “… A graduate must (now) have a working knowledge of web and print writing, video and still photography, nonlinear editing, podcasting, graphics and social media. Those well-trained and diversified students are the job applicants that are being hired in this challenging career field.”

MTSU’s new center enables students from all media disciplines to hone their real-world skills while working under one roof in a state-of-the-art facility. Inside, students write stories for print and the Web, create audio versions of the same stories for broadcast on radio stations and provide video versions of those stories for use on MT10 and on the station and center websites.

“We saw that we could bring together in one physical space all our student media and WMOT,” said Dr. Roy Moore, dean of the College of Mass Communication. “Dr. John Omachonu (former associate dean) and I had no idea where we’d find the space or find the funding, but we had a vision. And this is it.”

“Our students are now more than ever able to separate themselves from the crowd and be the people the industry wants,” said CIM Director Stephan Foust.

“We at WMOT have already seen an increase in student involvement and started working with many more students interested in developing audio-production and broadcast news-reporting skills,” added WMOT Station Manager Henri Pensis.

“Very few institutions in this country are providing this experience for their students, so not only will the Center for Innovation in Media benefit its individual media organizations, it will also benefit the students who take advantage of this opportunity to get a huge head start on their competition in the new media landscape.”

Amanda Haggard, a senior journalism major and editor-in-chief of Sidelines, summed up the accomplishments and the potential of a facility open only since January and already making a change in the way students learn.

“The center is a huge asset in bringing all our programs together,” she said. “The partnerships we built can only get stronger in the future, and I can’t wait to see what else will come out of the Center for Innovation in Media.”