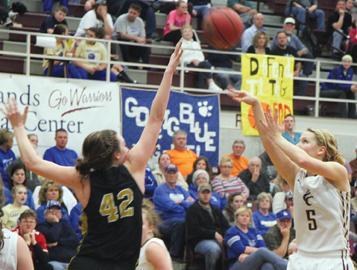 MTSU signee Abbey Sissom, 5, fires a 3-pointer over Smith County’s Allison Conder for three of her game-high 31 points in the Region 4-AA semifinals.

The Lady Owls had not seen this Cannon County team, either.

So, after three narrow games what gave in the fourth meeting?

“I saw a different team at practice,” Dodgen said. “It was a team that believed we were coming over here and we were going to win. They just believed it.”

Sissom said the Lionettes believed the game would not be close if they played up to their potential.

“We were saying we were going to win by 20 or more all day at school,” Sissom said. “We believed we were just that much better than them and we went out and played really well.”

Smith County standout Callie Hackett scored 28 but it was a quiet 28 and she was never able to become a strong factor in the game.

Cannon County jumped out to a 24-10 lead and never looked back.

“I hit those three shots and started feeling good,” Walkup said. “I was shooting with confidence. We all played well. We were determined not to let our season end in the region semis.”