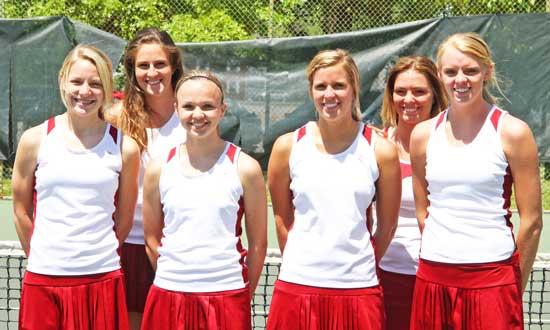 Cannon County's girls tennis team came with a point of capturing the District 8-A/AA Championship before settling for a second-place finish in a narrow 4-3 loss to Friendship Christian in Cookeville Thursday (May 5).

Darci Brandon, Taylor King, Emilee Lance and Jordan Hollis all won their singles matches against Central to pace the easy 4-1 win and set up the championship showdown against Friendship Christian.

"Taylor played a great match," Cannon County Head Coach Ronnie Burks said. "It may have been her best match. She was strong all-around and really got us going. She gave us a chance to win the championship."

King and Katlyn Currie dropped an 8-3 decision to Adrian Ricketts and Neal at No. 1 doubles, and Darci Brandon and Lance fell to Jenna Hazelwood and Baker at No. 2 doubles as Friendship Christian fought back for the narrow win.

"I am proud of the girls and the way they battled," Burks said. "They had a chance to win a championship and go to the region. We just came up a little short."

The boys team made short work of DeKalb County in the 8-A/AA first-round game. Mitchell Page took a 6-2, 6-3 win at No. 1 singles and then Taylor Blanton and Hunter Brown provided Cannon County a 3-0 lead with straight-set wins at No. 2 and No. 3 singles, respectively.

Bobby Fletcher took a straight-set win at No. 5 singles to clinch the 4-1 victory and move the Lions into the semifinals against Livingston Academy. Cannon County wasn't as fortunate in the next round, suffering a shutout against the Wildcats.

The individual district tournament is scheduled for Monday and Tuesday (May 9-10) in Cookeville.