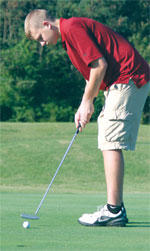 Cannon County sophomore Jacob Nave enjoyed a consistent week on the links for the Lions, leading the team in scoring in all three tournaments.

In addition to Nave’s 48, Hunter Vickers and Josh Ruehlen totaled 51s and William Parker finished with a 54 to complete the Cannon County scoring.

Nave improved his score by a shot from the previous day and led the Lions with a 46.The remainder of the team scored in the 50s to hamper any chance of making a run at the rival Tigers. Parker was second with a 50, followed by Vickers (51) and Ruehlen (57).

Cannon County capped the week with a three-team tournament against Central Magnet and Page. The Lions finished third overall but Nave continued a consistent week by leading the Lions with a 47.