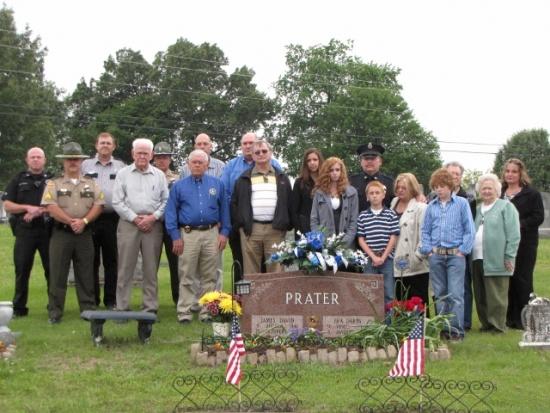 Current and former members of the Cannon County Sheriff’s Department along with family and friends remembered a fallen officer in conjunction with National Law Enforcement Week on Wednesday, May 18.

On the evening of January 8th, 1996 Deputy Ira Darby Prater was killed in the line of duty while trying to help residents of the Bradyville area after a massive snowfall.

The residents had no electricity or heat and the deputy was checking places and houses along the roadways of southern Cannon County. The road was very slick with ice and packed snow when Deputy Prater attempted to climb Dickens Hill.

Prater, who had just graduated from the Tennessee Law Enforcement Training Academy in Donelson less than a month earlier, lost his life when the patrol unit he was driving could go no further up the treacherous hill and started sliding backwards down the steep embankment and over the edge into the trees below.

“Deputy Prater was a young man, just starting his career in law enforcement, but in the time he had been with the Sheriff’s department, first as a corrections officer and then a deputy, he had shown that he was made of the fiber it takes to do the job of enforcing our laws,” said former sheriff Bob Stoetzel, who had hired Prater.

Officer Prater had the number 324 assigned to him and after his passing the number was retired and a memorial was placed in the waiting area in the entrance to the jail and administrative offices of the Sheriff’s Department.

Darby’s brother Shane had also served under Sheriff Bob Stoetzel and is now a Corporal on the Smyrna Police Department having been with them for the last 14 years.

Along with Shane was his mother Robbie Prater, wife Sheryl Prater with children Maddy, Riley and Reagan Prater. Darby’s uncle and aunt Mack and Betty Neely and Tracy Foster, a close friend of the family were also there to remember Darby.

A memorial for all of the US’s fallen officers is located in Washington D.C. and is the site of huge gatherings of family members on the 15th of May each year to remember and honor our nations law enforcement.

“It was a sad day back in 1996," remembers Stoetzel, "a good man gave his life doing what he believed in, and he will always be remembered.”

Print
Members Opinions:
tina
[Delete]
I remember the day well, as I was the dispatcher working that night. Darby was like a brother to me, and his family has became a part of my family. I can not tell you in words how much I miss him, but I can tell you that everytime the chimes he bought Robert an I for a wedding present rings I know Darby in his own way is dropping by and saying "hi" I miss you Darby and thanks to the CCSD for remembering such a great officer, who's life fell short, but passed loving what he did, to serve and protect.