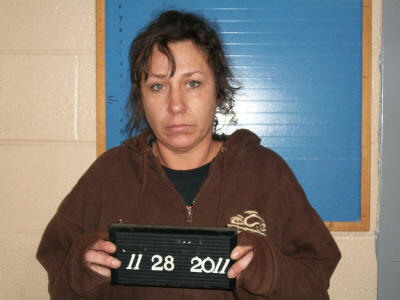 Cannon County Sheriff Darrell Young made a traffic stop of a suspicious vehicle on private property on Nov. 28. Deputy Eric Moss arrived on scene to assist in the investigation.

Upon arrival, Deputy Moss spoke with two females. One was Amanda Arnold, the owner of the vehicle, a red Nissan truck. The other was Nicole Muncey.

Deputy Moss asked both Arnold and Muncey if they had any narcotics on their person or in the vehicle. They said they did not. Arnold consented to a search of the vehicle.

Sheriff Young asked the women if they had anything illegal in their pockets. Muncey pulled out a cigarette pack with a marijuana cigarette inside.

All of the items were found inside a brown purse. Muncey stated the purse was hers. Muncey also stated that marijuana was her drug of preference and that it had been a week since she had used methamphetamine.

Sheriff Young did a warrants check on the two women and was informed by Cannon County Dispatch that Coffee County had an active warrant for Muncey for shoplifting.

Arnold was released. No charges were filed against her.