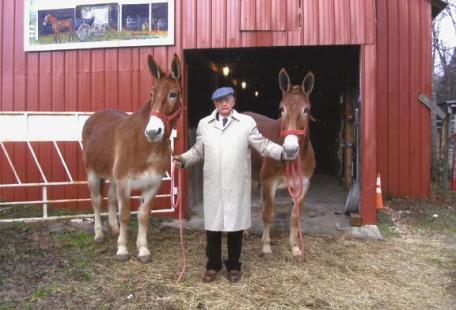 Bill Smith and his mules.


Mule Skinners have plowed and cultivated their annual May 11 showcase event in Woodbury into being the largest "One Day Mule Show in the Southeast," proclaimed group president Andy Duggin of Woodbury.

Monthly meetings of the Middle Tennessee Mule Skinners Association are anything but "typical" as evidenced by the age range of 7-month-old Whitley George and 94-years-young Bill Smith.

Founding MTMS member Smith can't recall his first mule show, "but my love for mules goes back to my youth when mules were a big industry in Cannon County."

"I was born on a 300-acre farm, where my father, grandfather and three sharecropping families all farmed with mules," noted Smith, one of the most note-worthy retired bankers in Cannon County history. "And as a 4-year-old, I recall seeing all the mules used in breaking up the earth when the great turnpike was constructed between Woodbury and Murfreesboro in 1922.

"Mules have a lot of heritage here, including Uncle Dave Macon's Freight business in the 1920s before he became a star on WSM Radio and the Grand Ole Opry.

How widespread is Mule Skinner membership?

"We have dozens of members at our monthly meetings," Duggins evidenced at the most recent meeting at DJ's Pizza & Steak House, 805 West Main, Woodbury.

"I make the motion we meet back here at DJ's Pizza again in March," noted Mule Skinner Danny Fraley after he was accompanied to the dinner meeting by fellow Rutherford County Mule Skinners Lytle Hodge and Coy Ricketts.

It was interesting to listen to Fraley and Woodland Mule Skinner Jimmy Simpson as they exchanged which style "shoes" work best on different sized mules.

Simpson formerly worked as a farrier for 30 years.

This recent meeting had members from Viola and Morrison in Warren County and Watertown and Smithville in Wilson and DeKalb counties.

Print
Members Opinions:
[Delete]
Great article! Amazing that at 94, Bill Smith continues to promote his beloved Woodbury and Cannon County. Thank you Mr. Smith for all you do. Am sure Andy Duggin would appreciate having his name spelled properly in this article.
annonomoose
[Delete]
always have been uninformed about "mule skinners".now i feel silly.always took the term literally.thought they actually "skinned" mules for their hides.now i understand the term applies to those who use a mule or a team of mules in their work,whether pulling a plow,or transporting goods in a wagon."skinning" refers to the ability of the driver to "skin"'or outsmart the mules which are fairly smart,and known for their STUBBORNESS.!glad to know they dont actually skin the mules. and i might add, "Mr. Bill" is an ICON of the community.thanks "Mr. Bill",and thanks to the "Courier" for this great article.
poplarbluff
[Delete]
Annonomoose...you're very informed, smart enough to be an adopted Mule Skinner...
annonomoose
[Delete]
(smiling) it would be an HONOR,thanks!