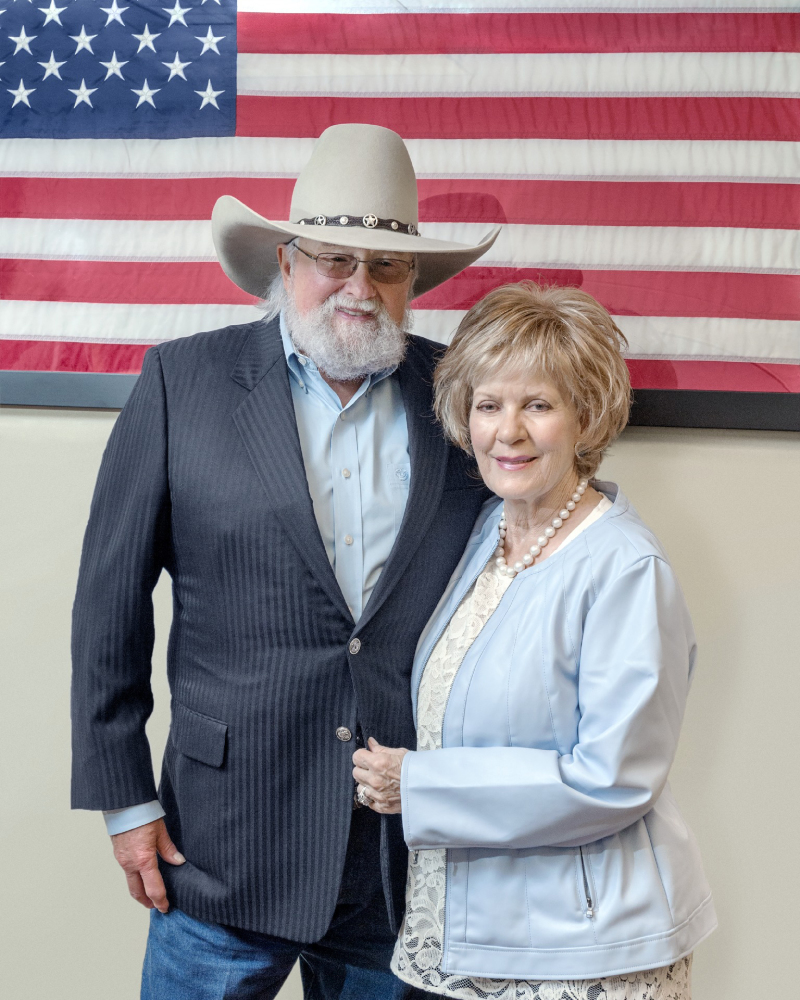 With the unveiling of a plaque and a new logo for MTSU's Charlie and Hazel Daniels Veterans and Military Family Center named for them, MTSU formally recognized the couple and The Journey Home Project he co-founded to assist veterans during a Tuesday (Aug. 23) celebration at the Miller Education Center on Bell Street.

Daniels and his wife, who have been married 52 years, were humbled and moved by MTSU's recognition, which included a presentation of MTSU football jerseys from athletics director Chris Massaro and senior defensive end Steven Rhodes, a U.S. Marine Corps veteran.

"It's an extreme honor having my wife and myself named for the veterans center," Daniels said. "I accept the honor on behalf of The Journey Home Project. We are just the tip of the iceberg. Thank you. I will carry this with me for the rest of my life."

Daniels said the center "is where veterans can obtain so much support -- health care, teleconferencing facilities, job placement, academics, government bureaucracy and a therapeutic place to sit and talk with others. Any problems they have they can get help at the center."

"MTSU has led the way in Tennessee regarding serving student veterans," Krause said. "We are excited to continue working with Dr. (Sidney) McPhee and Gen. (Keith) Huber to ensure that after serving their country, veterans are able to earn a world-class degree and enter the workforce ready to succeed."

Hazel Daniels said the university's acknowledgement of The Journey Home Project's gifts "are such an honor -- and it's so close to home (from theirs in Mt. Juliet). We love the military. It's a blessing having our names on the center."

"His support to the Veterans and Military Family Center establishes a space of trust and accountability similar to a military unit," Huber added. "Nothing can replace or replicate the bonds forged in combat, but student veterans will reach out to fellow veterans who share the commonality of selfless service and sacrifice. We all as veterans dream of finally coming home and continuing to serve as leaders in our community. This is the journey as we enter this next phase of our lives."

Invited by Huber because they serve on the Nashville Serving Veterans Community Board together, Nashville Mayor Megan Barry said "the work of the Veterans and Military Family Center changes many lives for the better, opening new opportunities up to veterans so they have every chance to reach their potential and continue serving their communities and their country in new ways."

McPhee said the Danielses "have given substantially to our center not once but twice and expected nothing in return." When he informed them of his decision to name the center in their honor, "they were surprised and appeared stunned. They simply didn't expect it. They were and are always humble, always gracious and always focusing on the needs of others, particularly our veterans."

The president said he hopes the "tangible recognition of the two great citizens that will be displayed in the center will, hopefully, inspire others to follow their example."

Journey Home Project board members David Corlew and Joe and Mercedez Longever joined Daniels at the event. Ed Hardy is the fifth board member.

Daniels' second Volunteer Jam was held in MTSU's Murphy Center. The university presented him with the Joe M. Rodgers Spirit of America Award in 2009. The Danielses and The Journey Home Project gave separate $50,000 (for computers and technology) and $70,000 gifts to the Veterans and Military Family Center in 2015 and '16. MTSU renamed the facility the Charlie and Hazel Daniels Veterans and Military Family Center in April.

Tutoring assistance, VetSuccess on Campus and more are part of the center's offerings. The center staff features five full-time staff, including a mental health counselor and more than 12 part-time student-veterans. To learn more, visit http://mtsu.edu/military/ or call 615-904-8347.