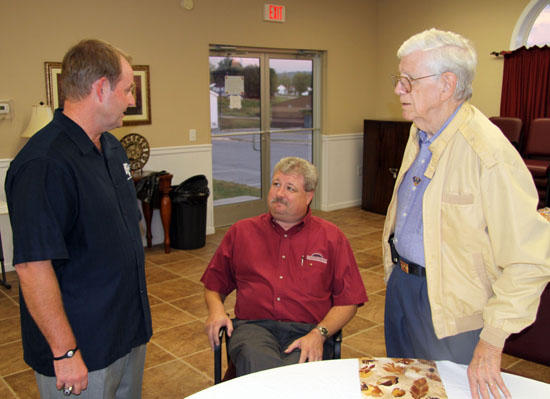 Davis, the third-winningest coach in program history and a three-time Sun Belt Conference Coach of the Year, talked to the group about not only the men’s basketball program, but also all of the positive things taking place at Middle Tennessee State University.

“It’s great to be here in Woodbury and visiting with so many Middle Tennessee graduates and supporters,” Davis said. “We have a great University, as all of you know, and great things are happening there. We are known throughout the country, whether it is football, baseball, women’s basketball, men’s basketball, volleyball, track, you can go on and on. There is something positive for everyone at Middle Tennessee.”

Davis also talked about academics and the importance of educating young people. He told the group the student-athlete grade point average at Middle Tennessee is higher than that of the actual student body and in excess of 3.0. Davis also talked about facility upgrades, the leadership of President Sidney McPhee and Athletic Director Chris Massaro, and the direction of the men’s basketball program.

“It was great to have Coach Kermit Davis as our speaker,” Lion Sue Patrick said. “We have a lot of people here who support and love MTSU and Coach Davis did a wonderful job sharing stories and talking about the University.”