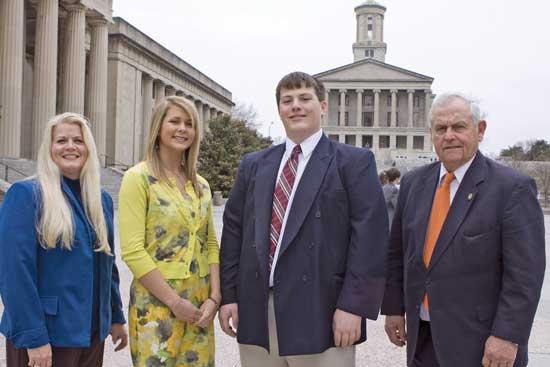 The visit, which included meeting state legislators and sitting in on Senate and House committee meetings at Legislative Plaza, was part of the Tennessee Electric Cooperative Association’s annual two-day Youth Leadership Summit.

“We had another excellent group of outstanding young leaders at this year’s summit,” Joe Jackson, TECA director of youth and member relations, said. “Considering the highly competitive and selective process they undergo to earn a spot, it’s no surprise.”

Their two days of activities began with leadership development activities at their hotel and visits from special guests, including 2009 Miss Tennessee Stefanie Wittler.

The second day included sitting in on House and Senate committee meetings, an overview of the legislative process from TECA Director of Government and Public Affairs David Callis and State Representative Phillip Johnson.

The students learned about the importance of electric co-ops through activities where they formed their own co-ops and worked to buy and sell power distribution supplies.

“It’s a privilege to provide these students with the opportunity to learn about state government and electric cooperatives,” MTEMC’s Community Relations Coordinator Cathy Mitchell said. “It’s great to see so many motivated students in our service area.”