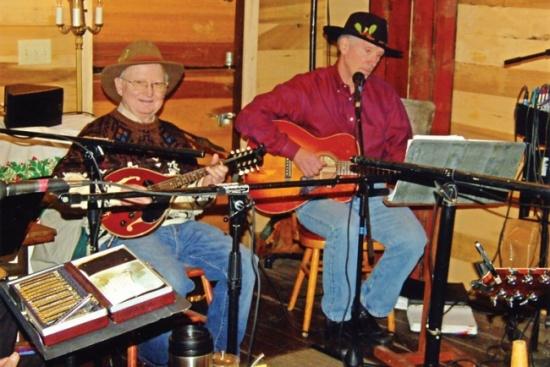 Area musician Billy Yearwood shared that while he was in his mother's womb 85 years ago, she prayed, asking God for a musician son.

The mother's prayer then got specific regarding what kind of music.

"She prayed for a boy, and that he play the mandolin," accounted the now 84-year-old son. "And I've never been really interested in any instrument other than the mandolin. It all goes back to Mother's prayer before I was born."

How good is the instrumentalist? So good, he turned down appearing and touring with two of Nashville country music industry's biggest stars when they were at their height of popularity back in the 1950s.

A passenger in my automobile stated this after recently listening to a gospel instrumental album featuring Yearwood on mandolin and 91-year-old Harry Smith on guitar: "Hearing Billy Yearwood play 'I'll Fly Away' is like being handed a bouquet of flowers directly from God."

After his birth in Nashville, parents Hugh Henry Yearwood and Irene Rice Yearwood lived in Rutherford County where Yearwood has resided his entire life.

Yearwood doesn't remember music not being in his life.

"Music comes from the soul, a gift from God from your innermost being," noted the lifelong resident of Middle Tennessee. "At age 3, I remember standing on a box, and cranking the handle on Mama's old wind-up record player, with the big speaker shaped like a flower."

"And Mom would sing to me sad songs, like 'Rosewood Casket' and 'Put Those Shoes Away,'" Yearwood stretched back across the centuries.

At age 7, his parents found a music teacher in Nashville.

"They put me on the bus  in Murfreesboro, and I would ride for music lessons each week in Nashville," Yearwood accounted. "There were no music teachers here, so Mother found a teacher in Nashville for me. It was exciting for a seven-year-old to ride the Greyhound bus all by himself, to and from Nashville."

During the past eight decades, Yearwood has made music throughout Middle Tennessee, including jam sessions too numerous to count with the likes of professional musician Mickey Harris and with the late Cannon County music-making icon, Billy Womack. Rutherford County native Harris tours the world.

"Mickey, a true star performer, often asks me to sit-in with him when he's back home," Yearwood noted.

And Yearwood has made music late into the night at Woodbury.

"We'd get together, sometimes at Billy Womack's barber shop and make music between haircuts, and sometimes, we played late into the night," Yearwood shared. "Billy Womack loved music too."

The seasoned ticket-holder of life has performed at Miller's Grocery in Christiana and the Bell Buckle Café. He's appeared at Uncle Dave Macon Days and innumerable nursing homes and York VA  Medical Center.

"At Bell Buckle, one day in walked Waylon Jennings and (wife) Jessi Colter, while we were in session for a radio show," Yearwood shared. "I remember hoping to maybe get to play with Jessi Colter. I was so honored to play the mandolin when she sang 'Storms Don't Last.' She tore that song up…

"I'll never forget what Waylon came up to me and said: 'Don't let anyone ever change your music,'" Yearwood added.

But, his "most appreciated" compliment didn't come from someone famous.

"One of the nicest notes of appreciation came a while back, when I was asked to perform privately for this 98-year-old lady in a care facility here locally," Yearwood added. "Her note, thanking me for my music, was one of the most fulfilling gestures…it touched my heart that my music helped her…I still have the letter.

"My music is not about money, and it's not about me, really," the musician shared with obvious humility. "It's about God that gives you the gift and love of making music."

Yearwood has never had a "number one" hit.

"I'm no star…never have been and I don't want folks thinking I'm bragging about my music and the greats I've known," Yearwood recalled. "I've been blessed with a love for music."

His music has touched great music-makers.

Between sophomore and junior years (1945) at old Murfreesboro Central High School, Yearwood made a fateful trip to Knoxville, where he sought an audition with the late husband/wife Johnny Wright and Kitty Wells, who were giants in country music in the early 1950s.

"Johnny and Kitty had a regular show, real popular on WNOX Radio," Yearwood recalled. "I arrived at the station after getting off the bus, and asked someone there if I could speak with Johnny and Kitty about a job playing the mandolin."

They were not in, but another famous performer was at the station.

"Someone directed me to speak with Wally Fowler, who had the first Oak Ridge Quartet, and he too performed on WNOX Radio," Yearwood strummed back across the centuries. "Wally asked if I could read music, and I shared that I could. When he handed me a sheet of music, it was a song that I knew how to play on my mandolin."

His formal music lessons of childhood paid off.

"Upon hearing me play, Wally Fowler shared that my music was what he was looking for, and hired me to perform with his group," Yearwood added. "So, I ended up playing with Wally Fowler and the original Oak Ridge Quartet the rest of the summer, until I had to come back home to attend school…it was a wonderful experience."

The fateful trip to Knoxville later opened another door that ultimately, Yearwood decided to not go through.

"Some time later, Johnny Wright and Kitty Wells contacted me, while I was still playing with Carl Tipton on WGNS Radio, offering a job to play with them," Yearwood shared. "I was newly-married, and marriage and family was my first commitment. I wanted to go in one way, but I turned down the job, where I'd have been making $75 a week."

"Our first performance would have been down in Shreveport, La., but as it turned out, I made the right decision," Yearwood shared. "But, it had been long-time personal dream for me to play with the world-famous Kitty Wells."

When not making music and taking care of family matters, Yearwood worked for the old Jewel Tea Co., as area manager in Middle Tennessee  from 1955 to 1973.

"Billy Yearwood's music is the essence of natural, and will never be replaced once it's lost," credited the musician whose musical stage name is "Johnny B and the Balladeers."

Yearwood is a key Balladeer, who helps headline the music-making at the regionally-famous Readyville Mill each Saturday morning from 8 a.m. to 12 noon, with musicians