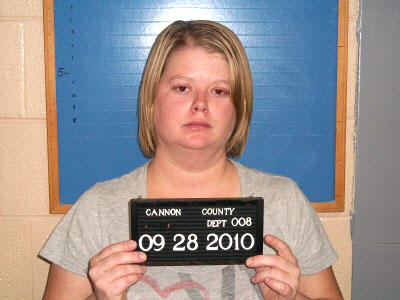 A Readyville woman who was convicted last year in Rutherford Co., and currently faces charges in Cannon Co., was indicted by the DeKalb County Grand Jury last week for theft of property over $1,000.

Sharon E. (Sherry) Morton, of 2966 Bradyville Rd., is scheduled to have a similar case heard by the Cannon County Grand Jury next month.

According to the DeKalb County Times, Morton was indicted in DeKalb County for allegedly taking money in excess of $1,000 from MACO Management Company without consent between November, 2009 and September, 2010.

Bond for Morton was set at $25,000. She is scheduled to appear in DeKalb County General Sessions Court on May 20, the same date the Cannon County Grand Jury meets.

On Sept. 28 of last year, Morton was arrested and charged with theft over $10,000 and violation of probation by the Woodbury Police Department.

That arrest occurred following a month-long investigation by Chief Tony Burnett and Asst. Police Chief Kevin Mooneyham. The investigation began after tenants at South Ridge Apts. stated to Mooneyham that they had been paying rent with cash.

Chief Burnett said at the time of Morton’s arrest in September that there was an ongoing investigation in DeKalb County, where Morton managed two other sets of apartment complexes. Sgt. Chris Russell of the DaKalb County Sheriff’s Dept. presented the case to the DeKalb grand jury.

Morton entered a guilty plea to theft over $10,000 in May of 2010 in Rutherford County and was placed on state supervised probation.

Print
Members Opinions:
punkin01
[Delete]
Is she ever gonna learn her lesson....

mlyngbld
[Delete]
Good God!!! I know were that money went, can you say "cheesecake".
[Delete]
when she done the bor check thing her restitution averaged about $270 a week on a 6 year term of probation. Now she has stolen money from woodbury and dekalb and violated on the boro. she was put back onprobation for boro because if she goes to prison they will not get their money. same will more than likely go for woodbury and dekalb. But with her now being in the computer for felon i really dont see how she going to make all that restitution in the time line they gave her. if she does not have it paid off in the time they give her then thats another violation. its never ending!!!! but she never learns!!
sugarbear2010
[Delete]
and while she waits for her grand jury cases to be heard in 2 counties---she is currently going to school to get her dental assistant license per her facebook page. at least shes trying something different.