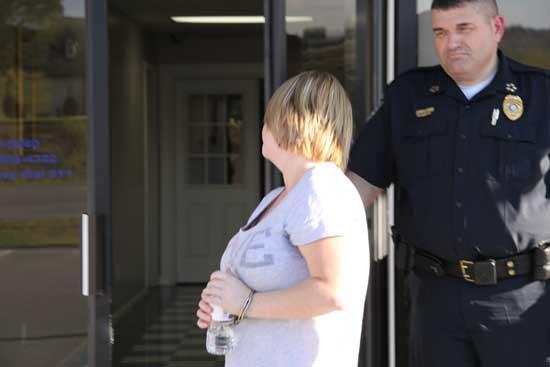 Sharon Morton of 2966 Bradyville Rd. was arrested on Tuesday, Sept. 28, 2010 and charged with Theft over $10,000 and violation of probation by the Woodbury Police Department.

The arrest occurred following a month-long investigation by Chief Tony Burnett and Sgt. Kevin Mooneyham. The investigation began after tenants at South Ridge Apts. stated to Sgt. Mooneyham that they had been paying rent with cash.

Chief Burnett had taken a burglary report at the apartments and remembered Sharon Morton stating that no cash had been taken and also remembered signs in the office that stated no cash.

"We have gathered a lot of information and evidence that shows Ms. Morton has been taking money from these tenants and MACO Management," Chief Burnett said. "There is also an ongoing investigation in DeKalb County where Ms. Morton manages two other sets of apartment complexes."

On Tuesday, September 28, 2010 a search warrant was executed at the home of Sharon Morton where missing receipt books along with 15 long guns and one handgun were confiscated.

MACO Management has been very helpful and cooperative in this investigation and vows to maintain their integrity to their tenants. If anyone has given cash for rent or security deposits since August 2009 at Southridge Apts. and we have not yet spoke to you, please contact the Woodbury Police Dept., Burnett said.

Woodbury Police Officer Chris Brown takes some of the guns taken during the search of Sharon Morton's home from a patrol unit Tuesday.

Woodbury Police Officer John Fesmire takes some of the 15 long guns confiscated during the search of Sharon Morton's home from a patrol unit Tuesday.

Print
Members Opinions:
cassie
[Delete]
omg!lol..its about time.. and sherry was right when she said"quote" karma is a B!***.. and wanted to talk about the people@ southridge living off the government..lol look whos doin it now.. free food,bed and underwARE... CONGRATS!!!!!!!!
Straitupmarilyn
[Delete]
You reap what you sow
nasrville
[Delete]
What a sad story. Sherry has a family that will hurt more over this situation. Hopefully they can learn from her mistakes. Prayers go out to Sherry and to her family.
cassie
[Delete]
the story is sad... for the children.. for sherry..it was just plain stupity!...
steph0124
[Delete]
This is sooooo funny!!! She deserves it!!!
shellschroeder
[Delete]
Why fill sorry for her when she ripped people off and call others white trash for stealing.
tcraw
[Delete]
Isn't she the same one who accused former deputy Aaron Hillis of all that stuff? Looks like we see how much her word is worth.
CannonCourier
[Delete]
As indicted in the first picture on this page, Courier Co-Editor Tony Stinnett took the photographs.