Moms And Pops Are His Favorite 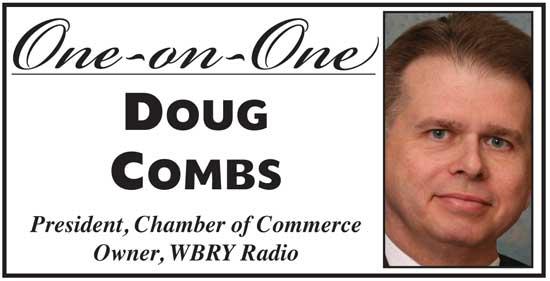 Ask 10 people in Cannon County what type of business they would like to see open up in this community, and you are likely to get 10 different answers.

Ask Cannon County Chamber of Commerce President Doug Combs and the answer would be "moms and pops."

"But moms and pops are more original stores, they're able to cater and reflect more to what the community needs than what corporate would like to see done and you're locally owned businesses will be more responsive to the local community and a good example of that is how our merchants respond to schools and different groups when they are doing fundraisers and they need help, you get that kind of response from a local merchant."

As the Chamber gears up for its biggest annual fundraiser, the Color of Fall Car Show on Sept. 26, Combs reflected on what type of year it has been so far for the county's business organization.

"You know like we get a lot of calls and get brought into a lot of things that you really wouldn't think the chamber would be the place to call. Senator Corker coming into town for a town hall meeting and we get the call. Can you guys arrange this? Can you find us a place? Can you put out the first word on publicity and stuff? And you get a lot of calls you just don't expect but business has been down."

As the economic recession has lingered in through 2009, just about every county in America has been negatively effected, and Cannon County is no exception.

"We've seen several businesses close," Combs said. "Probably the one that hurt everybody the most was Jennings Motors closing. I can respect the Jennings' family and what they decided to do, but it leaves a big hole in the community."

Cannon County is somewhat hindered in its ability to bring new businesses to the community because it lacks the resources to devote someone to the task of recruitment full time, Combs said.

"I don't think we are in a position where we have personnel to go out and do that type of work. I would like to see more recruitment occur but being the size community we are, we spend about 80 percent of our time doing fund raisers to keep the door to the chamber office open and that's year in and year out. There's nothing unusual about that. Sometimes I think when new (chamber) board members join and they see what we do on an annual basis, they are a little surprised because everybody thinks that the chamber has a lot of money and the chamber does not."

Combs said it would help both the chamber and the community to recruit more industries to the county. "If we were heavier from an industrial standpoint the chamber would be in much better shape if we were," he said. "Most chambers' membership are based on a businesses' number of employees as to what they pay. If we had some industries in town where we had members who had 50 employees or 75 or 100 employees we would naturally be a much healthier organization. We have been in discussion with city and county representatives on trying to plot out a course on behalf of everyone to more aggressively have our community represented from an industrial recruitment standpoint."

Combs said the opening of Potter's ACE Hardware this year has been a significant boost for the community.

"I think the addition of the hardware store is going to be welcomed by most people in the community. We had three businesses that were addressing that need, each to their own degree but by having a hardware store, full service hardware store, I think it makes a difference. I would like to see more, if I saw more businesses coming in, which we would all like; I would prefer them to be mom and pops than chains," he said.

The chamber has made significant strides in achieving some of its goals for the year, Combs said.

"There were three areas that I felt we needed to improve on. One was in communications and I was pleased to see that Michael Vaughn agreed to be our media chairman and he coordinates a lot of our information that we send out to publications and media sources outside of the county to promote things that we have going on in the county. We are also developing a newsletter for our members and that will be coming from his committee. We have started a merchant's committee and JoAnn Tate was gracious enough to agree to serve as chairman on that and hopefully we'll be seeing some coordinated effort on different events throughout the year from retailers."

"They've had great success with the merchant's open house each November and it would be good if we could see two or three additional efforts like that during the year. People who visit from outside of the county say they love Cannon County, they love Woodbury and we want to give them more reasons to come and to love.

"Third is focusing on a more coordinated effort with cities and county government on industrial recruitment or maybe the phrase I'm looking for is industrial preparedness so if someone were to call and say I need a place that I can have 30-40 employees. I need x number of square footage. We'd be able to immediately say we have this and this. We're looking at trying to do a coordinated effort between county, Woodbury and Auburntown government on that."

As for the immediate future, Combs sees the biggest need as being a coordinated effort on economic development.

"I guess if there were a wish list and I could get what I wanted, I would wish for a person who would be, whose specialty would be grant writing and they would work for the cities, county and the schools and what my proposal was for, the proposal from the chamber, for city and county to do is you designate a person to be your liaison with the state and this person will go to all the meetings," he said.

"This person will come well versed in what ECD needs and what they're looking for and this will be the contact person who will work with city and county government advising them of my recommendation was, you know you probably don't need a full time person for this but you need a person kind of addressing this and whoever they select, my recommendation was that they make a budget where this person could be compensated for their expenses and this person would also be compensated for their time. I don't think it should be the responsibility of their employer to pay them for a day of labor if they are sitting in meetings in Nashville all day."