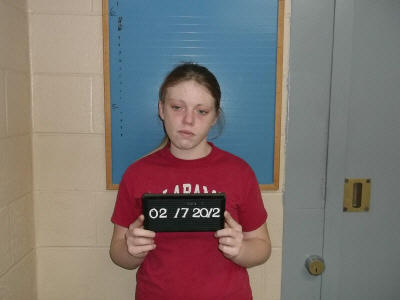 STEPANIE MOONEYHAM
Cannon County deputies Travis Turney and Eric Moss escorted Andrea Howard of the Department of Children’s Services to an address on Hopewell Rd. on Feb. 16 for a welfare check.

Upon arrival, they entered the residence. Howard was there to speak with Stephanie Mooneyham in regards to allegations she had been using narcotics in the presence of her infant son. Howard explained to Mooneyham why she was there and asked if she could have a look around the residence. Mooneyham told Howard that she could.

While Howard was inspecting the residence, she found two spoons which appeared to have been used to cook down narcotics in order to be injected intravenously. Mooneyham confirmed that the spoons were used in that manner. Howard then observed a short piece of straw and asked Mooneyham if it was used for snorting narcotics, to which Mooneyham replied yes. These objects were in plain view.

At this point Deputy Moss spoke with the owner of the residence, and informed him of what Howard had found. The owner granted permission to search the residence in writing.

Howard, Deputy Turney and Deputy Moss then found several other straws, four syringes, the bottom of an aluminum can that had been burnt on one side and contained some type of residue on the other, and an unlabeled pill bottle containing 18 Topiramate and 21 Meloxicam pills, neither of which Mooneyham has a prescription for.

Warrants were obtained against Mooneyham and she was arrested on charges of Possession Of Drug Paraphernalia and two counts of Possession Of A Legend Drugs. Total bond was set at $6,000. Initial court date is April 3.