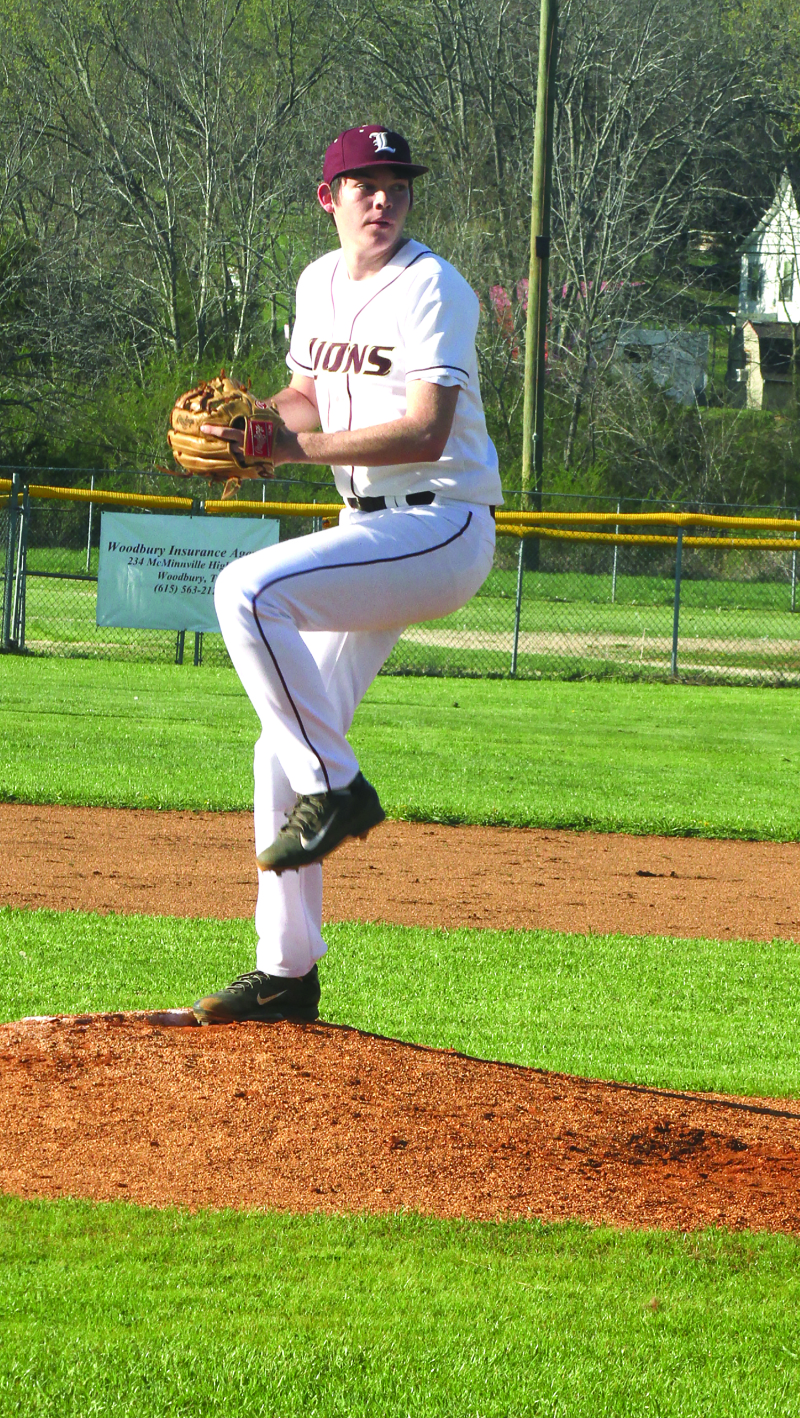 Austin Martin (6) pitching a one run complete game in the win over Macon County,

Most Cannon County middle and high school students were on Spring Break last week, including the Junior Lion and Lionette baseball and softball teams and the CCHS tennis teams. However, the other three teams on campus enjoyed mixed results as they are the middle of the district schedule.

CCHS Baseball
The Lions got off to a rough start on March 23 at Eagleville losing 15-1 to the Rutherford County neighbors. Three days later, they made the long road trip to face Fayetteville to play a double header against the Class A school. The Tigers won the first game 5-4, and second game finished in an 8-8 tie with the opponents running out of subs and pitchers since they only had 11 players. Both teams made the score interesting as each scored four runs in the sixth inning before the game was called.
In the doubleheader, Lions senior Preston Campbell scored twice as he hit a single and double. Fellow seniors Austin Martin and Tucker Francis also scored twice for CCHS.
During Spring Break, CCHS played a key home-and-home district series with Macon County on March 28 and 29. The first game was held at home, while the Lions took a trip the following day to face some more Tigers.
The first game of the series turned into a pitcher's duel as the Lions won their first district game of the season when Chandler Todd singled down the third base line on a 3-0 count to score Jared Judkins breaking a 1-1 tie in the bottom of the sixth.
CCHS pitcher Austin Martin and the defense held on for the win after stopping MCHS during their final at-bat. Martin finished the complete game with seven strikeouts, while the defense made several awesome plays in the field to keep the Lions in the game.
In the second game at Macon, the CCHS bats roared to life as it swept the series, 13-4, thanks to the offensive output of Francis, Judkins, Briar Jakes, Sam Schau and Todd. Also, Francis pitched a gem only giving up a hit, and Schau shut the door in the final inning finishing off Macon with only five pitches.
With the sweep, the Lions are back in the heart of the district race (2-2), and they hope to continue the momentum during an important stretch in the schedule.
"It was huge," CCHS head coach Colin Jones said. "We are one game out of first place in the district with the next two weeks being most important."

CCHS Softball
The Lionettes had a light schedule last week during the school holiday. CCHS played two key district games, due to weather concerns, on March 29 hoping to stay near the top of the standings in a unique doubleheader. The Lionettes hosted hated rival DeKalb County at noon, and then a few hours later they made the hour drive to Baxter to face Upperman on the same day without some of their key players who were on Spring Break.
They got solid defense, but the bats were quiet as the Lionettes lost both games, 16-0 and 10-0.

CCHS Boys Soccer
The Lions also played two matches last week, even though there were some schedule changes at the last minute. On Good Friday (March 25), CCHS welcomed district rival Goodpasture to town. However, the Cougars scored four goals in both 40-minute halves to rout the Lions 8-0. In the loss, CCHS junior goalkeeper Justin Hill still made several spectacular saves to keep them in the match.
The Lions had a match scheduled March 24 at Sequatchie County, but bad weather moved it to March 29 replacing the Macon County match. A makeup date has not been set for the Macon County yet.
CCHS fell behind 1-nil after the first half, but with 25 minutes left in the match, Jake Walkup scored to even it up at 1-1. However, the Lions gave up a heartbreaking goal with less than a minute left in the match to fall 2-1 and remain winless this season.

You can reach David at dhunter@cannoncourier.com