Mistake-Prone Lions Get Burned By Dragons 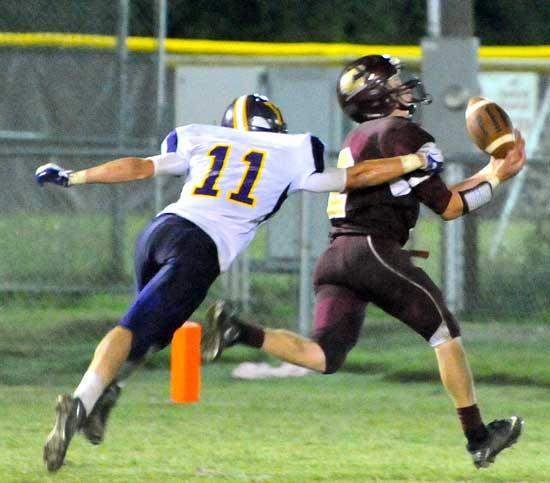 Cody Petro (#2) catches a long pass for a touchdown. (JOEL FRANKLIN photos)
At some point football players at Cannon County will have to learn from their mistakes.

Continued miscues were prevalent once again in the Lions’ 39-16 setback against York at Schwartz Field Friday (Sept. 16) as Cannon County remained winless through five games.

“We are five games into a varsity season and we are still making the same mistakes,” Cannon County Head Football Coach Joel Schrenk said. “What we are doing in practice is not translating to the (playing) field so we have to get this fixed. We are just doing stuff you can’t do and expect to win.”

Defensively, Cannon County could not get off the field in critical situations as York dominated the line of scrimmage and methodically played keep-away from the Lions’ potentially high-powered offense.

The Lions were consistently out of position or guilty of bad angles to ball carriers. The result was more than 300 yards rushing for the visiting Dragons (1-4, 1-1 District 8-AA). Quarterback Brannon McNellis was the main culprit, rushing for 150 yards on 24 carries. McNellis threw for two touchdowns and ran for another to lead the York offense.

“The last two weeks has been assignment football – read your key and do your job,” Schrenk said. “For whatever reason, we are not getting that done. We have to find a way to start getting it done.”

Cannon County (0-5, 0-2) was unable to get anything going offensively due to York’s ability to control the ground game coupled with several uncharacteristic drops by typically sure-handed receivers.

Sophomore quarterback Ryan Jordan was 13-of-27 for 164 yards. He threw touchdowns passes of 38 yards to Cody Petro and 26 yards to Justin Weaver. Jordan also had two interceptions.

Cannon County had the ball for just 15 plays in the first half and for just nine of the 24 minutes in the second half.

“I don’t care what offense you run, you aren’t going to score much when you don’t have (the ball),” Schrenk said. “We showed we can move the ball when we don’t make mistakes, but we hurt ourselves with drops that were on the money and penalties.”

Trailing 21-0 at the half Cannon County came out strong in the second half. The Lions marched 61 yards on three plays and capped the quick drive with Jordan’s 26-yard pass to Weaver. Waylon Sedtal and Justin Tobin had catches of 20 an 15 yards, respectively during the drive. Jordan connected with Tobin for the 2-point conversion as the Lions pulled to within 21-8 with 11:19 remaining in the third quarter.

Just when it seemed the Lions were back in the game, York responded with a 64-yard drive that took four-plus minutes off of the clock and capped it with a 15-yard scoring run to stretch the lead back to 27-8 following the failed two-point conversion.

York stretched the lead to 39-8 with 3:19 remaining before Cannon County responded with a 38-yard touchdown pass from Jordan to Petro. Sedtal had one of his best nights with three catches, two of which kept scoring drives alive.

Cannon County will return to action when it travels to Cascade Friday (Sept. 23).