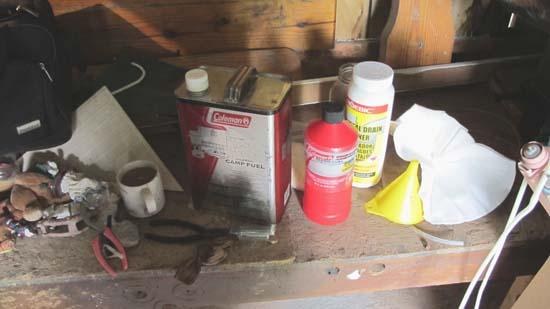 A Cannon County Sheriff’s sergeant was searching for a person reported as missing on Sunday. At one place he was looking, he discovered a meth lab.

Sgt. Randy Neal went to 7171 Hollow Springs Rd. after receiving word that the missing person had attended a birthday party there the night before.

Upon arrival Sgt. Neal was given consent to search the property. While doing so, he walked into a shed and discovered the remnants of a meth lab.

At that point Sgt. Neal contacted Investigator Anthony Young and he, along with Sheriff Darrell Young and Deputy Travis Turney, went to the residence.

They continued to search the property, and while doing so they found all the components needed to manufacture meth and a one-pot meth lab.

Investigator Young said the active meth lab was discovered in a compartment under the shed which was accessible by a trap door.

Two persons who live at the residence were arrested and transported to the Cannon County Jail.

Ashley Nicole Pope was charged with manufacturing methamphetamine. She also had a Capias for her arrest for failure to appear. Her bond was set at $106,000.

Initial court date for both Rains and Pope is set for July 12.

The person reported as missing was located later Sunday at a restaurant on Highway 53S in safe condition, Investigator Young said.