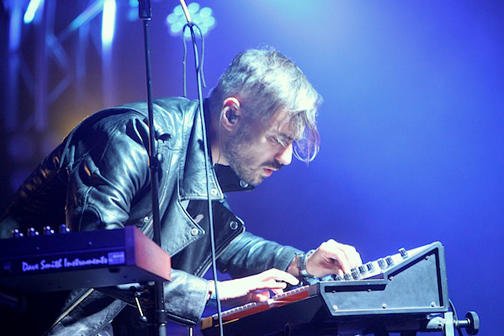 Front: British band, The 1975, was a highlight on the main stage at MIM.

It’s safe to say that Middle Tennessee is a clear cut favorite as one of the premier music destinations in the states. With the various festivals and city music scenes in the region, Music in the Middle gave fans one more reason to look forward to October each year.

Taking place, Oct. 4-5 on the beautiful acreage of Short Mountain Distillery in Woodbury, Tenn., the inaugural festival drew acts from the region and international boundaries as well.

The festival went all out for its first year with over 100 performers and four stages that included a full-scale Shiner Stage equipped with a striking light and visual rig along with a smaller stage under the cover of darkness within the Lunar Forest.

Crowds trickled in Friday throughout the day but hit their stride once the sun went down with Moscow’s Tesla Boy and Late Night Alumni. Other acts for the first day included locals Heather Moulder and The Hardin Draw with Zoogma, French Horn Rebellion and Viceroy.

While attendees seemed somewhat scarce on Friday, it looked as if crowds either doubled or tripled in size by Saturday night. Sets for the early evening included Nashville’s Space Capone and Portland’s Hockey among many others.

Hockey’s brand of dance punk was a warm start to nightfall as they played cuts like “Too Fake” from their Mind Chaos album and also threw in a cover of Daft Punk’s “Get Lucky.”

By this time, the Lunar Forest was heating up with sets from Lane 8, Du Tonc and Cassian. In the same moment, the Huff ‘n’ Puff stage was running a few sets behind, but attracted decent crowds for groups such as Static Revival and played host to other acts like Little Moses and Dapper Dan Man Band.

The highlight of the night was The 1975, an English indie rock band who released their self-titled album in September. Opening their set with “The City,” the contrasts of black and white were prevalent within the stage show and lighting. Playing for around an hour, the group kept the crowd going with other tracks from their new release such as “Chocolate” for one of their early introductions to American audiences.

As the night was nearing the early morning hours of Sunday, acts like Gigamesh and Aeroplane brought the two-day event to a close.

When looking back at the festival, it has much potential to be one of the best festivals in the area mainly due to the venue, time of year and the overall vibe that it is aiming to utilize.  Fixtures such as the large Music in the Middle marquee located on top of a hill and its laser projections across the landscape along with the setup of the Lunar Forest, simply add an aesthetic like no other. Mix these elements with great artists and you will have a two-day party that will be at the top of many checklists.