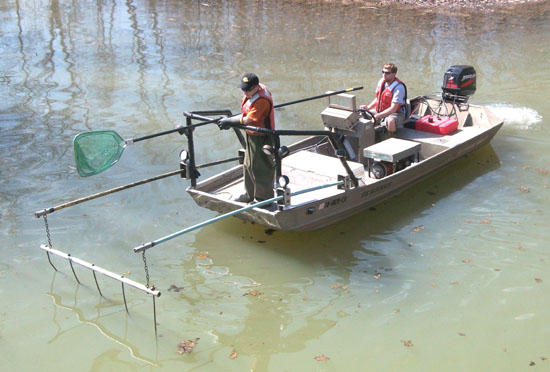 Tennessee Tech University fisheries students Drew Russell (left) and Matt Mork (right) electrofishing in the Caney Fork River.
COOKEVILLE, Tenn. (June 9, 2010) – The unprecedented flooding that occurred in Middle Tennessee in early May will have a dramatic – but short-lived – negative impact on the region’s fisheries.

Anglers will notice a “missing class” of many fish species in three to four years, said Phil Bettoli, a Tennessee Tech University biology professor and assistant unit leader for the U.S. Geological Survey’s Cooperative Fishery Research Unit based at Tech.

The Middle Tennessee region experienced deadly flooding following heavy rains that began May 1 and continued for three days. The Cumberland River in Nashville crested at 52 feet, its highest since 1937, according to the National Weather Service. Many parts of the region saw three-day rainfall totals between 12 and 15 inches or more.

Several naturally occurring fish species in the Cumberland River – like largemouth bass, sauger and crappie – probably didn’t reproduce this year during the optimal period from mid-April to late-May. If they did, their eggs or young were likely flushed out of their river or stream habitats and died. Trout populations, usually supported by stocking programs, also will be badly affected, he said. In places like the Caney Fork River below Center Hill Dam, the state will simply restock trout because the fishery is so highly valued.

“There will be measurable affects on fish communities, and for the most part, it won’t be good. But it’s short-lived,” Bettoli said.

“Some fish prefer habitats that are more lake-like and others thrive when it’s more river-like. But with a flood of that magnitude, there are a lot of species that are probably just going to skip a year of reproduction.”

That’s the bad news for the region’s fisheries. But there’s good news, too, Bettoli said.

“The next year, the fish will make up for it.” He said. “Nature has a way of bouncing back from extreme conditions very quickly. Eventually, nature has its way,” he said.

TTU biology researchers are working now to assess fish populations in the Caney Fork River as part of an ongoing project for the U.S. Corps of Engineers. Already, they’ve noticed a sizeable shift in the number and sizes of trout compared to last year. As their work continues, Bettoli says, biologists will be able to report the impact of the spring flood and heavy winter rains on the river’s 50 to 60 other species.