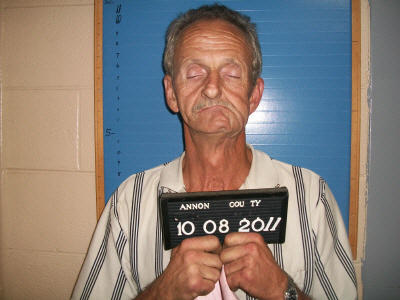 A Woodbury man found passed out in a truck was charged with DUI on Oct. 8.

Cannon County Sheriff's Deputy Travis Turney was dispatched to the area of Pleasant View Road and McMinnville Highway at approximately 6:15 p.m. that day to assist Cannon County EMS with a driver who had passed out behind the steering wheel of his vehicle.

Upon arrival the deputy spoke with George Mears, 496 Todd Rd., Woodbury, whose truck was parked in the middle of the road. Mears appeared intoxicated and had an odor of alcohol about his person.

Deputy Turney noted that Mears had slurred speech and could not answer questions clearly.

Meats stated he did not have the key to his vehicle and did not know how his truck got to where it was located.

When Deputy Turney searched Mears after he exited the vehicle, the truck key was found in Mears' right front pocket.

When asked why he lied about truck key Mears stated he did not know and further explained that he drove from his residence to the end of the highway and was not sure what was going on and would get confused while he was driving.

Due to his instability Mears was not administered a field sobriety test and was placed into custody for driving under the influence. He was transported to Stones River Hospital for a blood alcohol content test, then taken to the county jail for booking. His truck was released to a licensed driver.