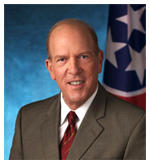 Democratic candidate for governor Mike McWherter will be at Joe's Place in Woodbury Tuesday (Jan. 26) for a "Meet and Greet."

McWherter, the son of former Governor Ned McWherter, will be here at 2 p.m. Tuesday.

Mike McWherter owns and operates a successful small business in Jackson. A West Tennessee native and graduate of Union City High School, McWherter earned his law degree from Vanderbilt University and worked in private practice in Nashville before moving to Jackson to start his own business and work in the community.

He is the Chairman of the Bank Board of First State Bank, headquartered in Union City, and serves on the board of directors for the Jackson Energy Authority.

As Governor, McWherter says he will work with Tennesseans from all 95 counties to create more good-paying jobs across the state.

He says he will work to give Tennessee students the education they need to be successful after graduation, and will work to ensure Tennesseans have access to affordable, quality health care.

McWherter says he will follow the examples of his father, former Governor Ned McWherter, and Governor Phil Bredesen by standing up for working families and applying his common-sense business experience to State Government.

McWherter, a native of northwest Tennessee, lives in Jackson with his wife, Mary Jane, and their children, Walker and Bess.