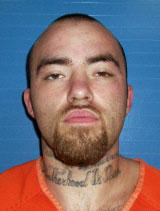 Being friends with a Cannon County man could prove to be costly for four persons.

After David William McPeak, 5962 Pleasant View Road, Morrison, was able to escape from law enforcement officers when they went there to arrest him on Oct. 12, they returned to the location four days later.

Upon arrival they checked out one trailer at the residence and did not make contact with him. They then went to the trailer in the back of the property and McPeak was inside.

Deputy Perry placed McPeak under arrest for Theft Over $1,000 for the theft of a vehicle reported stolen by Joshua Mullinax on Oct 12 while it was parked at the former East Side Market. Sgt. Neal saw the vehicle, a red Nissan truck, sitting in the yard of the residence and Sheriff Young called Cannon County Dispatch and ran the VIN and was informed it was the vehicle reported as stolen.

Once in custody, McPeak was also charged with Theft Over $10,000 for allegedly stealing a white Ford F-250 truck on Sept. 7 and for Resisting Arrest stemming from the attempted apprehension on Oct. 12.

Officials with the Cannon County Sheriff's Department went to the 5692 Pleasant View Road address to look for David McPeak. While speaking with occupants Holt and Green they stated they didn't know the whereabouts of McPeak. Both knew McPeak was wanted by law enforcement. He was subsequently located on the property. Bond was set at $1,500 for each. Initial court date is Nov. 1.

Two other persons, Cynthia D. Thomas and Justin T. Barrett, had been previously charged with Accessory After the Fact in the case involving McPeak. They also face charges stemming from the Oct. 12 incident at the 5692 Pleasant View Road address when officers discovered an alleged methamphetamine lab.