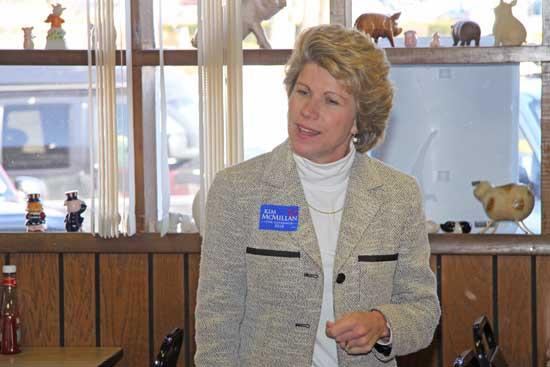 McMillan's first stop was J.P.'s Fine Swine BBQ on the Public Square, where she had a "Meet and Greet" with those in attendance and spoke about the issues she says are important to the future of Tennessee.

She next took a tour of the Cannon County Courthouse and businesses in the downtown area.

While she was doing that another Democrat in the race, State Senator Jim Kyle of Memphis, announced that he was ending his bid to succeed Phil Bredesen, whose second and final term as governor is coming to a close at the end of this year.

"After careful consideration and consultation with my family, I have decided that I will no longer be a candidate for governor of Tennessee," Kyl said.

"It is clear to me that while our campaign had the assets to be competitive in the primary, the legislative fundraising restriction, the economy, and my duties as Senate Leader have severely hampered my ability to generate resources which would have been vital to our success in the general election," Kyl added.

Kyl's decision leaves only two candidates — McMillan and Mike McWherter — in the Democratic primary, which will be held August 5. The statewide election is set for Nov. 2.

Of all the candidates in the field, including Republicans and Independents, McMillan has the most experience when it comes to state government.

She was the first woman in Tennessee history elected Majority Leader of the State House of Representatives.

In 2002, and again in 2004, she was elected by her colleagues to the position of House Majority Leader.

In 2006, McMillan did not seek re-election to the Tennessee House of Representatives and accepted an appointment by Governor Bredesen to his Cabinet, where she served as Senior Advisor to the Governor.

Like all other candidates for the position, McMillan said the top priority for Tennessee right now is putting people to work.

"I believe the biggest issue obviously we have across our state right now is jobs," McMillan said. "Our unemployment rate is higher than it has been in over 25 years and we've got to do something to help a lot of these communities where people are unemployed.

"How do we do that? We have to focus on education, because so much of what we see in a lot of the jobs of the future and the jobs that are coming in requires people to be educated. Employers tell me 'we need an educated workforce, somebody that's educated in what we do' and the importance of that, so I think it is kind of tied together.

"My major focus is first of all jobs but second of all education and continue to work and partner with employers that we can to bring into this state and those that are already here to see what we can do to help them."