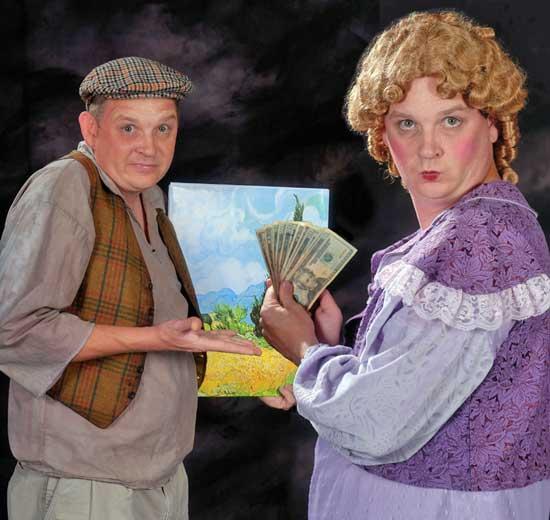 Donald Fann plays the dual roles of Jean-Francois Millet and his twin sister Widow Daisy Tillou.
Is He Dead? will be performed onstage at The Arts Center of Cannon County, April 23 through May 8. Tickets are $10 with discounts available to groups, seniors and students. For tickets call the Arts Center Box Office at 615-563-2787 from 10AM-4PM Monday through Saturday, or purchase them online at www.artscenterofcannoncounty.com.

Season 2010 continues at The Arts Center of Cannon County with the Mid-State’s premiere of Mark Twain’s rediscovered comedy Is He Dead? At the show’s center is a fictional, farcical tale about Jean-Frances Millet, a brilliant, but impoverished and unrecognized painter. Since Jean-François can’t sell a landscape to save his life (literally), his inner circle of friends convince him that faking his death is just the ticket for raising his stock. As the riotous scheme unfolds, Jean-François disappears from life and re-emerges as his imaginary twin sister. The expected antics and complications ensue.

Tickets may also be purchased online at www.artscenterofcc.com. The Arts Center Cafe is now open before all performances, so be sure and call in advance for our discounted dinner/show packages.

Is He Dead? is sponsored by Woodbury Funeral Home and is part of the 2010 Stagedoor Series sponsored in part by The Old Feed Store Antique Mall. The Arts Center is located on 1424 John Bragg Highway, just west of the town of Woodbury, approximately 20 minutes from Murfreesboro, Manchester, and McMinnville and one hour southeast of Nashville. Box office hours are 10:00a.m. to 4:00p.m., Monday through Saturday.

What: Mark Twain’s Is He Dead?