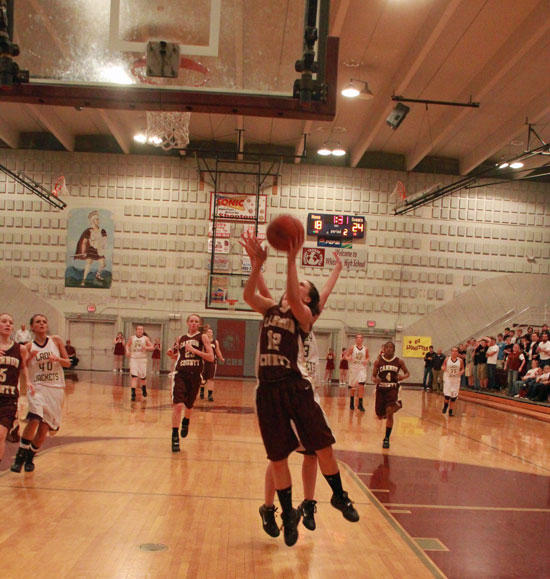 District 8-AA Freshman of the Year Abbey Sissom scored 11 points and was one of four Lionettes in double figures as Cannon County reached the Region 4-AA finals for the second straight year with a 72-49 win against Grundy County Monday. (CANDICE JONES pho
SPARTA - March Madness officially is here.

No. 8-ranked Cannon County punched its ticket into the TSSAA Class AA Sweet 16 with a resounding 72-49 win against District 7-AA champion Grundy County in the semifinals of the Region 4-AA Tournament at White County High School Monday night.

The Lionettes (27-7) will face No. 4 Livingston Academy (29-4) in the Region 4-AA championship Wednesday at 7 p.m. The Lady Wildcats have won the three previous meetings this season, including last week's District 8-AA Tournament championship game on the same court.

Monday's win against Grundy County not only put the Lionettes in the region title game, but also assured it a spot in Saturday's Sectional - one win away from the TSSAA Class AA State Tournament at MTSU's Murphy Center. The winner of Wednesday's game will play host to the runner-up from Region 3-AA, and the losing team will travel to the Region 3 champion.

"It's a great feeling to know we are going to play somewhere Saturday," Lionettes Head Coach Michael Dodgen said. "I feel like everybody pegged this team to be in this (Region Championship) game before the season started and it's created a lot of pressure for the kids and for me as a coach. You feel good to finally get to this point but it only gets tougher."

But Taylor King was everywhere, doing everything. The senior standout turned in a second straight double double with 12 points and 11 rebounds, but also added six assists, collected four steals and blocked three shots.

As the games have intensified, so has King's play.

"We knew this was going to be a tough game and it was," King said. "It was a battle, but we are a determined team and we were determined to get this win tonight."

Lindsey Reed and Abby Jakes each netted five points but it was Reed's defense, not offense, that helped control the game as she forced Grundy County's point guard into 11 turnovers. Grundy County was led by Chelsey Wiseman's 18 points.  If not for a slow shooting start and 12 first-half turnovers, Cannon County would have had a chance to put the game away much earlier.

Instead, Cannon County still led 28-21 at the half because it limited Grundy County to just eight field goals and forced 15 first-half turnovers.

"We didn't have the start we wanted but we still were able to get the early control and maintain that," said Emily Sissom, who picked up her second foul in the first quarter. "We didn't want this to be our last game. Now it's like reality. Everything you have worked for is right there. We want to take that next step. We really want to get this win Wednesday so we can play at home for our fans. We have such great fans and they are always there for us."

Getting Emily Sissom back on the court for the second half helped the cause. So did a little halftime advice from Lions basketball coach Matt Rigsby.

"Coach Rigsby saw something from the bleachers and came down at halftime and suggested an adjustment for the second half," Dodgen said. "That's what I love about our relationship - I help him and he helps me."

The adjustment seemingly worked as Cannon County was able to score the ball in the post at will in the second half, but it was still the long ball that started the avalanche. Leading 38-33 with less than three minutes remaining in the third quarter, Emily Sissom connected for her second trey in a two-minute span to push the lead to 41-33. Two possessions later Abbey Sissom launched a successful 3-pointer to push the lead to double figures for the first time, 46-36, with 1:15 remaining in the quarter.

Grundy County (21-7) could never get the game back to single digits from there as the Lionettes continued to pull away and secured a berth in the Region 4-AA title game for the second time in as many years.