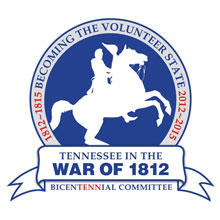 Burning the White House — Sacking the U.S. Capitol:  scenes unimaginable today, but part of our past 200 years ago during the War of 1812.  This pivotal but now forgotten international conflict pitted the recently established United States of America and its Native American allies against what was then the world’s greatest military power, Great Britain.  The war lasted for three years and raged across the new nation, from New York to New Orleans, and into Canada.  The war cost thousands of lives, and millions of dollars in lost property, but made Andrew Jackson of Nashville and Edmund Pendleton Gaines of Kingsport household names while introducing such famous Tennesseans as Sequoyah, Davy Crockett, and Sam Houston to the public stage.

The story of Tennessee and Tennesseans in the War of 1812 is the focus of a public symposium, “The War of 1812, the Atlantic World, and Tennessee,” on March 17, 2012, at the auditorium of the downtown Nashville Public Library.  Sponsored by the MTSU Center for Historic Preservation, the Tennessee Historical Society, and the Special Collections at Nashville Public Library, the symposium is free and open to the public, beginning at 9:30 a.m.  To pre-register for the conference, email the Tennessee Historical Society at info@tennesseehistory.org.

Four leading scholars of the War of 1812 era will speak.  Native American history expert Dr. Robbie Ethridge of the University of Mississippi will speak on “Indian Country in 1812: The Life and Times of the Southern Indians on the Eve of the War of 1812."  Dr. Caitlin Fitz of Northwestern University will address the international impact of the war in “The Hemispheric Dimensions of Early U.S. Nationalism: The War of 1812 and Spanish American Independence.”  Dr. Kristofer Ray of Austin Peay State University in Clarksville will specifically address the Volunteer State’s role in the conflict in “Tennessee and the War of 1812.”  The keynote address will be delivered by the nationally recognized expert Dr. Donald Hickey of Wayne State College, who will discuss “Why is the War of 1812 Important.”

“These four leading historians will help everyone better grasp the significance of the war, not just on the South but how it shaped state and federal governments and Native American nations in North America,” states Dr. Carroll Van West, director of the MTSU Center for Historic Preservation.

Tennessee Historical Society executive director Ann Toplovich adds:  “The March 17 bicentennial symposium highlights the profound significance of the War of 1812, the first time since statehood that Tennesseans took the national stage and shaped the course of American history.”

Leading up to the symposium are several events commemorating the War of 1812.  On March 15, The Hermitage will celebrate Andrew Jackson’s birthday with half-price admission. On March 16, the Library of Congress workshop for teachers, Teaching with Primary Sources Across Tennessee, will be held at the Downtown Nashville Library.  Those pre-registering for the symposium are also invited to the evening reception and tour of the new exhibit “Becoming the Volunteer State: Tennessee in the War of 1812,” on Friday, March 16 at the Tennessee State Museum.  For information on all events visit www.mtsuhistpres.org.

Those with an interest in exploring Tennessee sites will want to pick up the new driving tour brochure which highlights over 30 places and museums associated with the War of 1812.  Produced by the MTSU Center for Historic Preservation, the brochure will be available at the symposium.  In addition, all symposium attendees receive discounts at The Hermitage: Home of President Andrew Jackson, Travellers Rest Plantation and Museum, and the Tennessee State Museum.

For more information about the symposium, contact Ann Toplovich at the Tennessee Historical Society (info@tennesseehisotry.org) or 615-741-8934)