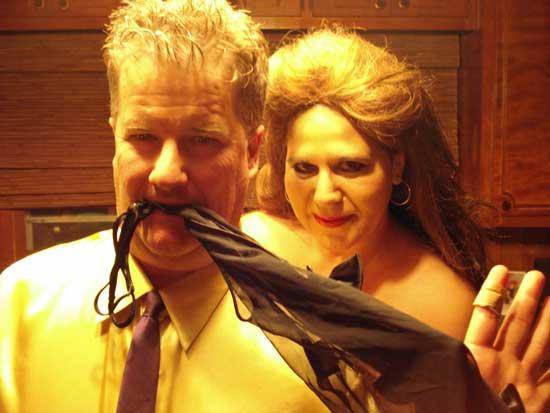 Steve Luster as Norbert and Deanna Payne as Pippi.
Out Front Productions kicks 2010 with THE GREAT AMERICAN TRAILER PARK MUSICAL written by David Nehls and Betsy Kelso and directed for the stage by George W. Manus, Jr.

Show dates are January 8-24, 2010 with performances on Friday and Saturdays at 7pm and Sudays at 2pm. All tickets are $15.00. The Great American Trailer Park Musical will be performed at Murfreesboro Little Theatre, 702 Ewing Blvd., Murfreesboro, TN Reservations and info at (651) 893-9825 or www.mltarts.com.

The Great American Trailer Park Musical is a country-rock and blues musical about the lives and loves of a trailer park community.

"The story of Pippi, a new tenant (and runaway stripper) at Armadillo Acres, Florida's most exclusive trailer park.

Her arrival wreaks havoc on the unhappy marriage of the agoraphobic Jeannie and her tollbooth collector husband, Norbert."

This stellar cast is backed by the accompinment of the White Bay Freddie Band and Morris Hamby. Don't miss this cross between Desperate Housewives and Jerry Springer says Director Manus. You will fall out of your seats with laughter and experience the touching star crossed, white trash lovers as the comedy ensues. With toe tapping tunes this production offers a little something for everyone. The Great American Trailer Park Musical contains adult language and situations; mature audience is recommended.