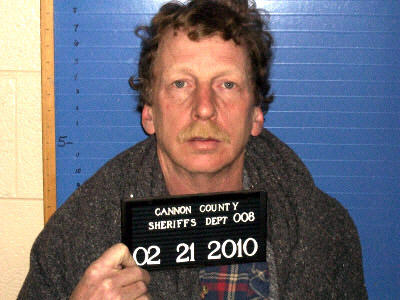 David W. Gares
A Cannon County man is recovering from injuries he received in a hit and run accident on Saturday, February 20 on Jim Cummings Highway.

According to Trooper Daren Butler of the Tennessee Highway Patrol, Ray Basham of 61 Raines Ridge Road, just off Highway 53 South, was driving north in a 2002 Saturn when his vehicle was struck in the rear by David W. Gares, 49, of Tanglewood Trail in Estill Springs at 6:35 P.M.

Gares left the scene before law enforcement could arrive on the scene driving a dark colored mini van or SUV reported Deputy Anthony Young of the Cannon County Sheriff’s Department, who arrived on the scene minutes after it occurred.

Mr. Basham was transported to Vanderbilt Hospital by LifeFlight helicopter due to the severity of his injuries.

A witness at the scene stated that Mr. Gares struck the Basham vehicle and did not stop.

On Sunday, February 21 a call was received at the Sheriff’s Department stating the vehicle involved in the crash was seen on Pleasant View Road. A female at the residence where the van was reported seen had given Mr. Gares a ride to Estill Springs but they were stopped by the Coffee County Sheriff’s Department.

Gares was returned to the Cannon County Jail where he was booked on charges of Leaving the Scene of An Accident, No Drivers License and Failure to Give Notice of an Accident. He posted a $6,500 bond and was released. He will appear in General Sessions Court on Tuesday, March 16 to answer the charges.