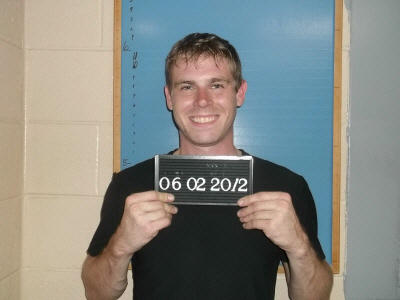 Deputy Perry responded to a BOLO for a purported reckless driver in a back Mazda inbound from Warren County on McMinnville Hwy. He observed the vehicle coming down the hill, turned around and initiated a traffic stop just short of the Woodbury City Limits.

The deputy walked up along the driver’s side of the car just behind the front door window. He instructed the driver, Foster, to roll down the window. Foster refused. Deputy Perry knocked on the window and again told Foster to roll it down. He again refused.

During this time Deputy Perry observed Foster moving his arms and hands around the front interior of the car. The deputy was unable to tell what Foster was doing. Deputy Perry then noticed a shotgun sitting in the passenger side of the car.

He drew his service revolver and opened the door. When he did, Foster tried to pull it back shut, at which point the deputy noticed a pistol in a shoulder holster on the left side of Foster, at which time the deputy ordered Foster to place his hands on the steering wheel of the car.

Deputy Brandon Gullett and Woodbury Police officers John House and John Fesmire arrived at the location. With the other officers covering him, Deputy Perry holstered his weapon and took the pistols (a 1911 Colt 45 and a 9mm Browning) off of Foster and handed them to Officer House. He removed Foster from the vehicle and placed him in handcuffs. Foster remained non-compliant and attempted to pull away from the officers.

Deputy Perry observed that Foster smelled of beer. Foster said he had consumed four that evening. He had a white-looking substance on his tongue and the inside of his mouth, and appeared to have eaten something while he as moving about in the car.

Foster was unsteady on his feet. He was placed in the back of a patrol unit. He began to sweat profusely and was unable to remain still.