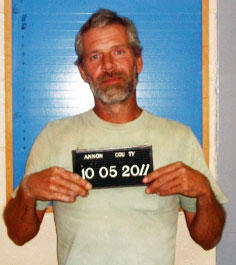 ERQUHART
A man who was kicked out of the local probation office for drinking was charged with DUI on Oct. 5.

Cannon County Sheriff’s Deputy Brandon Gullett reported he was on his way home on that date when he observed a small vehicle headed toward him on Highway 53 South. The vehicle then made a sharp turn into the Cannon Market lot. As Deputy Gullett got closer the vehicle pulled out in front of him.

The deputy then observed the interior light come on inside the vehicle the as it veered into the opposite lane of travel. He then pulled in behind the vehicle as it took off going southbound on 53S. Deputy Gullett pursued the vehicle south toward Manchester at speeds ranging from 80 to 100 mph before getting it to stop at Pelham’s Auto Salvage.

Upon making contact with the driver, Richard Wayne Erquhart, 2639 Eugene Reed Rd., Woodbury, Deputy Gullett could detect an odor of an intoxicating beverage coming from the vehicle and Erquhart.

The deputy asked Erquhart where he was going in a such a hurry, to which Erquhart stated he was coming from the probation office in Woodbury. Erquhart said he was in probation for domestic assault.

Erquhart was unable to satisfactorily perform a series of field sobriety tests administered by Deputy Gullett. A search of his vehicle uncovered two 12-ounce beer bottles inside.

Erquhart was placed under arrest and charged with DUI. His bond was set at $3,000. He is scheduled to make his initial court appearance on Nov. 1.

Print
Members Opinions:
myview
[Delete]
You mean the probation office knew he was drinking and "just asked him to leave"?
Denver01
[Delete]
The probation service in Cannon County is a joke, it time to make law breakers to do the time for the laws they broke.
[Delete]
If everyone currently on probation in Cannon County were in jail, it would have to be at least three times the size it is. The corrections officer staff would have to be tripled. So would food costs. It is extremely unlikely taxpayers would go for the additional expense.
Denver01
[Delete]
This clearly shows that Cannon County's probation system is broke, when they allow a man who been drinking to leave their premises. I do not know the rules for probationers but I am certain they are not suppose to show up after they been drinking. This man will more than likely be put back on probation again after his probation officer violate him and he will probably break the law again. And this what we call justice.

[Delete]
The only recourse for a probation officer in these instances is to violate the offender. They don't have arrest powers. However, I do agree in some respects the probation system needs improvement.
TnT
[Delete]
The probation officer doesn't have the power to arrest. However, they could have called the police. I can't believe they would tell him to leave knowing he would be getting in a vehicle and possibly be driving. Did they not check this out or do they even care?! Your probably right Denver01 they will more then likely get more probation and the cycle will continue.