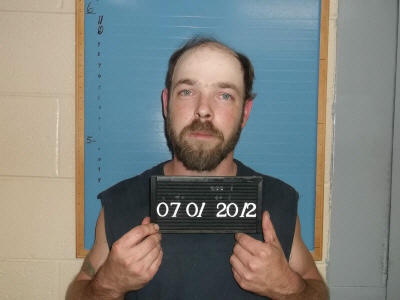 Cannon County Sheriff’s deputies responded to a call about an unwanted guest recently, but end up arresting the complainant for DUI.

Deputy Seth Perry was dispatched to2784 Hollow Springs Rd.on July 1 for someone that had been in the home and wasn’t supposed to be there.

Upon arrival he spoke with Bobby Lee Jones, 1254 Weeks Rd.,Murfreesboro. Jones stated that a person had come into the home while no one was there. Jones stated the person had pulled a $300 thermostat off the wall and also “tore up” the house.

Jones stated the thermostat was “out there somewhere” and pointed at the field in front of the house.

Deputy Perry notices Jones had a cut on his left middle finger and had bled on his clothes and on the front of a black Dodge Neon he was leaning against. Jones and the deputy went inside the house and when inside the deputy saw a hole in the wall where the thermostat was. Several blood drops were on the floor leading into the kitchen where a cabinet door had been broken.

Jones appeared to be under the influence of an intoxicant. He smelled of an alcoholic beverage. His speech was slurred and he was unsteady on his feet. Jones said he had had a few beers.

After finishing the investigation at the house Deputy Perry and Deputy Brandon Gullett, who had arrived to assist, met at the intersection of Myrtle Road and Hollow Springs Rd. to discuss the incident. They were there less than three minutes when they witnessed Jones drive by at a high rate of speed in a black Dodge Neon.

Deputy Perry initiated a pursuit of the vehicle and it pulled into a driveway on Bush Rd. Jones jumped out and began to explain that he was just there to “get things right.”

When asked to submit to a sobriety test Jones became very argumentative. He stated he knew he had been drinking and he had more than he should have to be driving. He said he knew he was above the legal limit because he had just received a DUI in Coffee County.

Jones became increasingly belligerent and deputies were unable to complete the sobriety test. He said Deputy Perry was a (bleeping) idiot from Cannon County and only had a third grade education.

Jones was placed under arrest and charged with DUI, Driving While License Revoked, Open Container and Violation of the Registration Law. Total bond was set at $5,300. Initial court date is July 24.