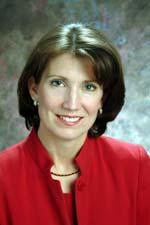 SUSAN LYNN
MT. JULIET — Representative Susan Lynn has announced her intention to file a petition next year for the 17th District Tennessee State Senate seat being vacated by State Senator Mae Beavers (R-Mount Juliet). Addressing local business leaders, residents and friends at the Mt. Juliet Chamber of Commerce, Representative Lynn stated that “serving in the Tennessee General Assembly has been one of the greatest privileges and opportunities of my life. Today, I announce that I am running for state senate in order to expand and extend the mission of public service on which I embarked in 2002.”

The Representative explained her approach of reaching her decision to run for higher office by stating that “Since our state senator’s announcement this past June that she intends to seek the office of Wilson County Mayor in 2010, I have spent time traveling throughout the 17th District in order to meet the people and visit with the local elected officials.” She continued, “This wonderful experience has brought me many new friends, and I have learned much about the strengths and needs of the area.”

The 17th Senatorial District is composed of Wilson, Cannon, Clay, DeKalb, Macon, Smith and a portion of Sumner County in Hendersonville. Lynn further stated, “It is evident that an attentive and experienced legislator is what is necessary to immediately start meeting the needs of the area. I would be proud to accept the challenge of working for my fellow citizens throughout the 17th district to help with the many infrastructure, economic development and education needs of the area; whether working to bring new jobs to Clay County, voting to finance the repair of bridges in Smith and DeKalb Counties or helping to fund school improvements in the upper Cumberland region; I pledge to the citizens that I will do my best to help with the crucial needs of the area just as I have dedicated myself to the issues of Sumner and Wilson Counties over the past seven years.”

Noting her service as a conservative legislator who works to support Jeffersonian Principles such as limited government, states’ rights, capitalism and our constitutional rights, Lynn mentioned several examples of her work that are now law such as the Regulatory Flexibility Act, Tennessee State Sovereignty Resolution and the Religious Freedom Protection Act. “The citizens of the district are conservative; I am proud to share my strong conservative record with them; much of which is documented on my new website at votesusanlynn.com.”

Lynn assured that she remains firmly and unshakably against a state income tax and continues to sponsor legislation to lower the sales tax on food; “years ago, I was on a special task force that drafted a bill for a sales tax holiday which I now vote to support annually in order help my district with the expenses of raising a family.”

Susan Lynn has represented the 57th Legislative District in the Tennessee House of Representatives since 2002 when it was first redistricted. She is the chairman of the House Government Operations Committee and a member of the House Calendar & Rules Committee. Further, she has served for seven years on the House Commerce Committee and the Small Business Sub-Committee. In addition to her legislative duties, Rep. Lynn serves as Task Force Chairman of the Commerce, Insurance and Economic Development Task Force for the influential American Legislative Exchange Council. She holds a Bachelor of Science degree in economics with a minor history. A member of the First Baptist Church of Mt. Juliet, Rep. Lynn makes her home in Lebanon with her husband of 27 years, Michael. They have two adult children – Michael Lynn, Jr., a staff sergeant in the Tennessee Air Guard, who is engaged to wed SSG. Alissa Saunders; and a daughter, Mrs. Grace Douchette and husband Benjamin; both are employed by Publix Supermarkets.