Low Vision Machine Being Put To Use 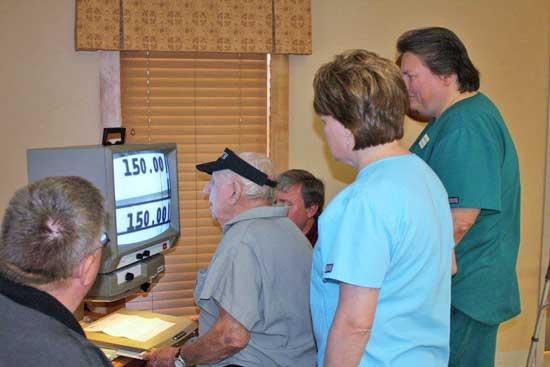 Left to Right, Lion Carl Hirlston, Loy Smith, DG Cliff Swoape, Tina Miller, and Melinda Bailey.  Woodbury Nursing Home Resident Loy Smith is able to read a letter due to the use of a Low Vision Machine given to the Woodbury Nursing Home by the Woodbury Lions Club.  Loy and other patients are now able to read their mail, newspapers, Bible's, and view photos due to aid of this machine.

Recently Woodbury Lions Club members Carl Hirlston and Cliff Swoape placed a Low Vision machine at the Woodbury Nursing Home.  This machine magnifies whatever is laid on its base so that the sight impaired can read material or see items clearly. Reading the newspaper, letters, books, their Bible, and look at photos is made possible to many with poor vision.  These machines are provided as part of what Lions of Tennessee do to assist the blind and visually handicapped.

Lions around the world have a common goal of helping those with sight problems.  The Woodbury Lions Club has many projects in helping with sight.  Lion Lois Larimer, with the help of other Lions Club members, goes out to the Daycare centers, pre school classes, and any place children under age 6 gather to screen the eyes of these small children. A newly-developed digital instrument called SureSight is used in these screenings.  This instrument is 96% accurate and can detect a potential eye problem before it becomes a major problem. Around 5 percent of the more than 350,000 pre-school children screened in Tennessee by the Lions have been found to have a vision problem that could result in a lifetime of visual impairment or even blindness if not treated in a timely manner. This project, called Operation KidSight, operates statewide on an annual budget of over $200,000, all paid for with money raised by the Lions.

Lion Carl Hirlston and other Lions work with the Cannon County School Health Department to screen the vision of students in grades 2,4,6, and 8th. They use a mobile unit with screening equipment provided by the Lions of Tennessee.

Lions Gerold Molitor and Carl Hirlston interview the indigents with vision problems and give financial aid to help with eye exams and glasses.  When Lions Club members learn local residents needing help with more serious vision problems, they are interviewed and referred to  Middle Tennessee Lions Sight Service. Treatment including eye surgery at Vanderbilt Hospital is made available to those who qualify.

These services are funded with money collected by Lions Clubs in Middle Tennessee on White Cane Day each October. Other programs such as:  The Tennessee School for the Blind; Leader Dog School; Lions World Service for the Blind; and Recordings for the Blind and Dyslexic also receive financial support from White Cane collections.

District Governor Cliff Swoape heads a statewide project to make the public acutely aware that diabetes is the leading cause of blindness in developed countries. His campaign includes urging everyone to have regular tests for diabetes.