Love Is In The Air At AHS Reunion 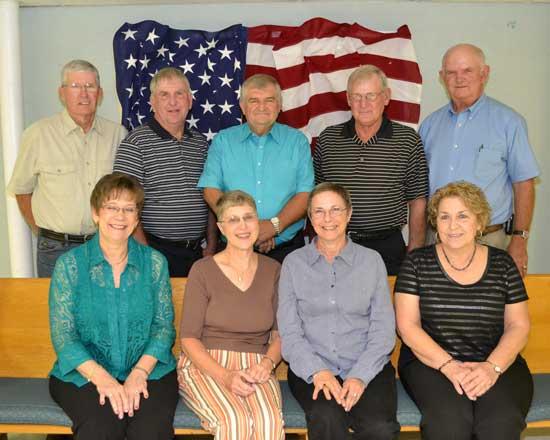 Classmates indicated they felt the same with welcome smiles and engaging conversation. There were 12 seniors in the class of 1965 and 19 who graduated in 1966.  Saturday was their fifth joint class reunion attended by 16 classmates.

“It is great to keep in touch with old friends,” stated reunion co-coordinator, Janice Ritchey. “I was away from Auburntown with my husband during his military career. I missed getting to visit school friends and desire to have closer contact with them during my retirement years.”

Elaine Mingle who also helped organize the event, mentioned within their ranks are four brothers -- Bobby and Gary Pitts and twins, J.C. and J.B. Hughes. Three couples got married after high school -- Dwight and Kathryn Saddler, Jimmy and Elaine Mingle and Earnest and Rita Davis.

Prior to a “pot luck” meal, there was special remembrance of deceased classmates.  Joe Jones died in the state of Texas in December 2006. Auburntown residents Garland Jones departed this life in March of 2008 and Lloyd Don Mingle in May 2011.

A variety of meats, sides and desserts were served at mealtime. A fresh coconut pie was cooked by Bobby Pitts with help from his wife Nelda. Chocolate ice cream cake and lemon tarts were created by Janice Ritchey and shortbread cookies were baked by Rita Davis. The popular cookie recipe was obtained from Glennette King who was in food service at AHS for many years.

World events greatly impacted the lives of the graduating seniors of 1965 and 1966.
President L. B. Johnson authorized expansion of the Vietnam War in July 1965 which increased recruits for Selective Service. Joe Jones, Earnest Davis, Lynn O’Neal, Dwight Saddler and Lloyd Don Mingle were drafted into the U.S. Army soon after high school. Saddler, O’Neal and Mingle served in the jungles of Vietnam. Douglas Gaither was in the ROTC at MTSU and served in the U. S. Army for three years.

Back home in America during the mid-1960s, social and economic equality were paramount with the Women’s Liberation Movement. Females began to earn equal pay for equal work as mandated by the 1964 Civil Rights Act. Combining marriage with a career was the choice of the gals attending this reunion.

Owner of Rita’s Beauty Shop in Auburntown, Rita Davis, has been a beautician for 45 years. For the past 17 years, Joann Tate has owned and operated Jennings Jewelry in Woodbury. She is a member of the Historic Cannon County Chamber of Commerce. Elaine Mingle has owned numerous antique stores in and around Auburntown. Jann Beasley continues a 29 year career in property management. Bobbie Hale manages the Woodbury Grammar School cafeteria, and Paulette Gilley who has four children works in publishing. Retiree Jo Ann Frances was employed by the Cannon County Board of Education until last year. Janice Ritchey ended a 20 year teaching career five years ago and Betty Thomas was engaged in manufacturing for 27 years.

A class reunion display of old Auburn High School annuals and photo albums documented youthful friendships and school activities.  The Auburn High School building was destroyed by fire in 1977 but nothing will ever take away fond memories among classmates and of the teachers who taught them.