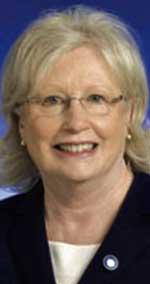 SEN. BEAVERS
There probably won’t be much bacon for state legislators to bring home this year when they complete their work in the 2010 session of Tennessee’s 106th General Assembly.

That’s because they will be spending a majority of their time looking for ways to cut any fat they can find in the state budget, and beyond that they will likely be forced to make cuts to programs and services as they work to fulfill their constitutional mandate of crafting a balanced budget.

Sen. Beavers, a Republican, will be serving her final term in the legislature this session, as 2010 is an election year and she has decided not to seek another term in order to run for the office of Wilson County Executive.

Rep. Bone, a Democrat, is entering the final year of his seventh two-year term in the House and plans to seek reelection in the November election. He serves as Chair of the House Agriculture Committee and is a member of the Calendar and Rules, Finance, Ways and Means, Pensions and Insurance and Subcommittee on Agriculture committees.

Both legislators are bracing themselves for a session that will probably result in some reductions in state spending and services.

“The major issue will be the budget, no question about that, and the cuts that are going to have to be made,” Bone said. “Some things will probably be cut that personally I would not like to see happen.”

Cuts will have to be made to the state’s budget because revenue, the majority of which comes from the sales tax, is down.

“I believe the main issue will be the budget,” Beavers said. “With the growth in spending, revenue shortfalls, and plugging holes last year with the stimulus money, the state budget will remain the main focus for several years to come.”

Revenues have been less than projected, Bone said, but he does not expect the legislature to impose any new taxes in an effort to make up the shortfalls.

“Many cuts will have to be made in order to balance the budget,” Beavers said.

The first order of business for Beavers and Bone will be a Special Session called by Governor Phil Bredesen. During that session the legislature will discuss ways to improve Tennessee’s education system in order to apply for funding from the federal government’s Race to the Top program, which is part of the stimulus act. The deadline to apply is Jan. 19.

The special session will begin Tuesday (January 12) to coincide with the start of the regular legislative session, placing education first on lawmakers’ agenda as they return to the Capitol.

Bredesen acknowledged this year’s tight budget environment but noted, “Sometimes the stars line up to create an opportunity that no one expected. And when you’re in public office, you’re obligated to seize the moment when that happens. This year we’ve had a couple of unique, unexpected opportunities drop in our lap that I believe will allow us to focus on the entire education pipeline in one fell swoop and hopefully make some changes that will be felt for years to come.”

The federal government’s Race to the Top competition is one of those opportunities, as states will compete for a share for more than $4 billion in Recovery Act funds. Race to the Top applications are due on January 19, 2010, and the U.S. Department of Education has said the states that will be the most competitive will be those that already have policy changes in place at the time of application.

Through Race to the Top, the U.S. Government is asking states to advance reforms around four specific areas:

• Adopting standards and assessments that prepare students to succeed in college and the workplace and to compete in the global economy;

• Building data systems that measure student growth and success, and inform teachers and principals about how they can improve instruction;

• Recruiting, developing, rewarding, and retaining effective teachers and principals, especially where they are needed most; and

• Turning around our lowest-achieving schools.

Awards in Race to the Top will go to states that are leading the way with ambitious yet achievable plans for implementing coherent, compelling, and comprehensive education reform. Race to the Top winners will help trail-blaze effective reforms and provide examples for States and local school districts throughout the country to follow as they too are hard at work on reforms that can transform our schools for decades to come.

The second part of the Governor’s call for a special session will involve higher education.

“In 2010, it’s only natural that we focus on the entire education pipeline as we look to create a more skilled workforce,” said Bredesen. “As we all know, it’s not just about getting kids through high school anymore. It’s also about students completing their degrees or certificates so they can get high-quality jobs and have a decent quality of life.”

Among changes Bredesen will call on lawmakers to consider is modernizing the state’s funding formula for higher education to make it substantially based on performance, such as higher degree completion rates.

Federal education officials are pushing states to expand charter schools, use test scores to assess teachers and consider paying educators for how well they do in the classroom.

Of concern to many in K-12 education is the Governor’s call to require teacher performance evaluations to be based on student performance data, such as standardized tests. These evaluations would then be used to determine tenure. Many are concerned that this is a major change in the way teachers are currently evaluated and receive tenure.

Currently teachers are evaluated on the effort they expend in the classroom, such as in; creating lesson plans, interactions with students, and continuing their own education. The concern in basing teacher evaluations, and thus tenure, on standardized testing is that there are many variables that factor into a student’s performance on a test, and how much the teacher worked to prepare them for that test is only one of many.

The changes in K-12 education would also create a special “Recovery School District” that would allow the state to become involved in struggling schools more quickly.

Following the special session, lawmakers will focus on balancing the budget, adequately funding education, and streamlining state government functions. With analysts predicting at least a $1 billion budget shortfall, lawmakers face difficult decisions in the months ahead.

Sen. Beavers says her top priorities for the regular session are: Ethics for judges, DUI legislation and legislation to allow Tennessee citizens to buy health insurance across state lines.

“I will watch to make sure there are no mandates to the counties and that we don’t balance the budget on the backs of counties,” Beavers said.

Bone said he will be working to secure state funding for needed projects in Cannon County, including road, water line and other infrastructure improvements.

“I have always tried to support local agencies and groups,” Bone said. “We need to get more public water out there to people in the county. Getting it moved around is the problem, but we’ll keep working at it, because there are so many people who need a better source of water.”