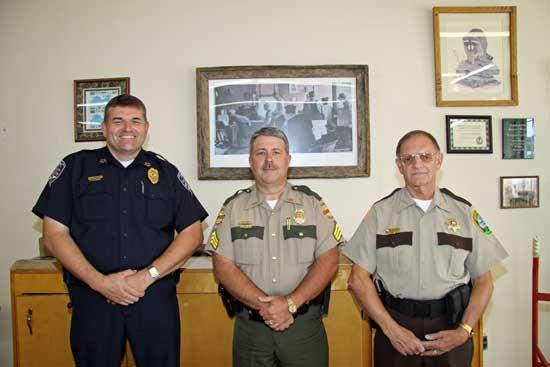 From left, Woodbury Police Chief Tony Burnett, Tennessee Highway Patrol Trooper Sgt. Billy Prater and Cannon County Sheriff Billy Nichols will join forces this week for the state-wide “Take Back Our Highways” campaign July 26 to Aug. 1st.
The Tennessee Highway Patrol is teaming up with the Mississippi Highway Patrol, Georgia State Patrol, Florida Highway Patrol and Alabama’s Department of Public Safety as well as local law enforcement agencies across Tennessee, for an intensive joint initiative aimed at reducing traffic fatalities and increasing safety. During the week of July 25 through August 1, 2009, nearly every available member of THP, including Colonel Mike Walker and his command staff and administrative personnel, will actively patrol the roads during the multi-state safety campaign, called “Take Back Our Highways.”

“The goal of this effort is to save lives,” stated THP Colonel Mike Walker. “The public can expect to see a marked increase in the number of law enforcement officers on the road and a concerted effort to “Take Back Our Highways” from aggressive and hazardous drivers. If you’re drinking and driving, speeding, driving erratically or displaying any type of aggressive driving that endangers others, you can expect to see a State Trooper or local law enforcement officer.”

During the week-long enforcement period, THP will utilize all available manpower, including members of its Aviation Section, Interdiction Plus teams and Special Programs, to target dangerous drivers on all roadways in Tennessee. Troopers will also conduct sobriety and driver license checkpoints and saturation and line patrols, concentrating on areas prone to crashes. Troopers will target aggressive drivers, impaired drivers, speeders, and drivers who fail to buckle up.

Tennessee State Troopers participated in a similar “Take Back Our Highways” enforcement campaign with Mississippi and Alabama last year during the week of August 18-23. This multi-state effort first began in November 2007 when Colonel J. Christopher Murphy, Director of the Alabama Department of Public Safety, suggested the three states work together to ‘Take Back Our Highways”.

“Every time you get behind the wheel, you should buckle up, obey the speed limit and pay close attention to driving safely,” stressed Colonel Walker. “This multi-state campaign has real results, and we are proud to join Alabama and Mississippi once again along with Georgia and Florida on this effort.”

This enhanced presence will continue through the end of the summer as THP participates in other safety initiatives, including a nation-wide campaign, “Drunk Driving. Over the Limit. Under Arrest.” This annual crack down runs August 21 through the Labor Day holiday weekend. Preliminary figures show that 489 people have been killed on Tennessee roadways in 2009. That is down from 553 fatalities at this same time a year ago.

The Tennessee Department of Safety’s mission is (www.TN.Gov/safety) to ensure the safety and general welfare of the public. The department encompasses the Tennessee Highway Patrol, Office of Homeland Security and Driver License Services. General areas of responsibility include law enforcement, safety education, motorist services and terrorism prevention.