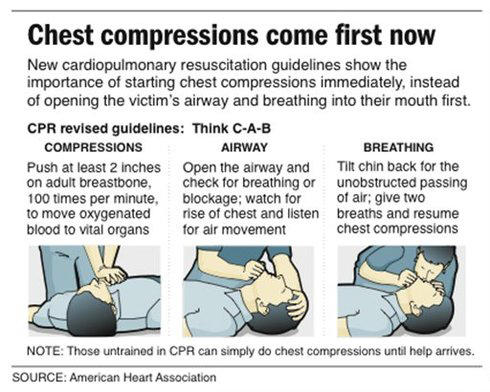 Constable Jim Gibbs, who is also a CPR Instructor for both the American Red Cross and the American Safety and Health Institute, announced today important changes in the CPR guidelines.

New guidelines out today switch up the steps for CPR, telling rescuers to start with hard, fast chest presses before giving mouth-to-mouth. In other words Chest presses first, then give breaths. That is a switch from previous guidelines.

In recent years, CPR guidance has been revised to put more emphasis on chest pushes for sudden cardiac arrest. In 2008, the heart group said untrained bystanders or those unwilling to do rescue breaths could do hands-only CPR until paramedics arrive or a defibrillator is used to restore a normal heart beat.

Now, the group says everyone from professionals to bystanders who use standard CPR should begin with chest compressions instead of opening the victim's airway and breathing into their mouth first.

The change ditches the old ABC training -- airway-breathing-compressions. That called for rescuers to give two breaths first, then alternate with 30 presses.

"When the rescuer pushes hard and fast on the victim's chest, they're really acting like an artificial heart. That blood carries oxygen that helps keep the organs alive till help arrives," said Sayre, an emergency doctor at Ohio State University Medical Center.

"Put one hand on top of the other and push really hard," he said.

Sudden cardiac arrest -- when the heart suddenly stops beating -- can occur after a heart attack or as a result of electrocution or near-drowning. The person collapses, stops breathing normally and is unresponsive. Survival rates from cardiac arrest outside the hospital vary across the country -- from 3 percent to 15 percent, according to Sayre.

Under the revised guidelines, rescuers using traditional CPR, or cardiopulmonary resuscitation, should start chest compressions immediately -- 30 chest presses, then two breaths. The change applies to adults and children, but not newborns.

One CPR researcher, though, expressed disappointment with the new guidelines. Dr. Gordon Ewy of the University of Arizona Sarver Heart Center thinks everyone should be doing hands-only CPR for sudden cardiac arrest, and skipping mouth-to-mouth. He said the guidelines could note the cases where breaths should still be given, like near-drownings and drug overdoses, when breathing problems likely led to the cardiac arrest.

Ewy is one of the authors of a recently published U.S. study that showed more people survived cardiac arrest when a bystander gave them hands-only CPR, compared to CPR with breaths.

The guidelines issued Monday also say that rescuers should be pushing deeper, at least 2 inches in adults. Rescuers should pump the chest of the victim at a rate of at least 100 compressions a minute -- some say a good guide is the beat of the old disco song "Stayin' Alive."

Dr. Ahamed Idris, of the University of Texas Southwestern in Dallas, said people are sometimes afraid that they'll hurt the patient. Others have a hard time judging how hard they are pressing, he said.

"We want to make sure people understand they're not going to hurt the person they're doing CPR on by pressing as hard as they can," he said.

Idris, who directs the Dallas-Fort Worth Center for Resuscitation Research, said that for the last two years, they've been advising local paramedics to start with chest compressions and keep them up with minimal interruptions. That, along with intensive training, has helped improve survival rates, he said.

He said they found paramedics hadn't been starting compressions until the patient was in the ambulance and lost time getting airway equipment together.

"The best chance was to start chest compressions in the house, immediately," he said.
___