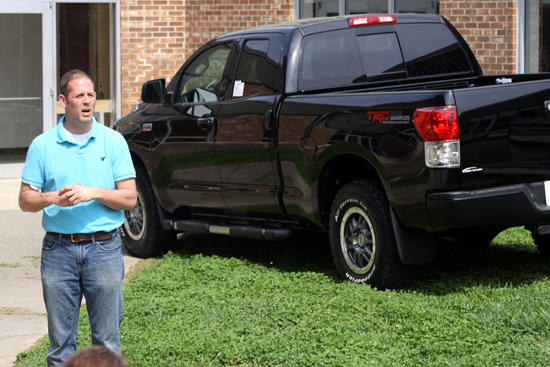 Being chosen as one of the nation's top educators comes with privileges.

Courtney Nichols, director of career technical programming and a teacher in the agriculture department at Cannon County High School, was recently honored with the Outstanding Agricultural Education Teacher Award from the National Association of Agriculture Educators (NAAE).

Nichols was one of five recipients nationally and only the second ever from Tennessee to be so honored.

His labor in the classroom came with another reward.

"I am honored to receive this award," Nichols said. "I'm really appreciative to Toyota for the truck. That was as unexpected as the award. I am fortunate to work at a great school with great students who want to succeed in the field of agriculture."

Nichols has taught agriculture at CCHS for six years. He spearheaded a new horticulture program to open students' and the community's mind about all the diverse opportunities that agriculture ha to offer.

Previously, the only courses that CCHS offered were Agriculture I, II, III, IV and Agricultural Mechanics. In order to create a new curriculum there also had to be a place to each these new concepts. This led to the addition of an 1,800-square foot greenhouse.

During the first year of the horticulture curriculum's launch, the CCHS agriculture program saw an increase in student participation from 140 students to 289 and, even better, the students produced a successful crop.

"Mr. Nichols is one of the favorite teachers of the students at CCHS and his horticulture program has added a lot of pride to the students and the school," Cannon County Principal Tim Knox said. "Mr. Nichols is also doing an outstanding job as the Director of Career Technical Programming at CCHS.

"The Outstanding Agricultural Education Teacher Award is an outstanding honor for Mr. Nichols, the Career Technical Education Program at CCHS, our school and our community. With just five educators chosen nationally to receive this honor, this is quite an honor."