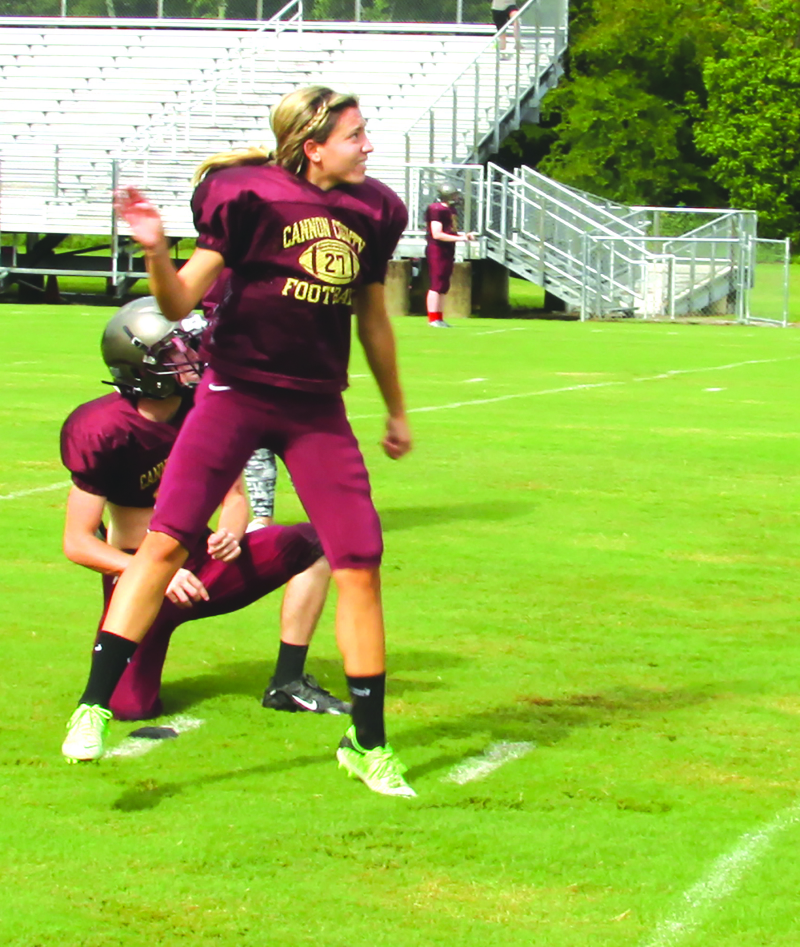 The Cannon County High School football team is hard at work preparing for the upcoming season, which starts on Aug. 21 at Community.

The Lions have been working on all aspects of the team, including having preseason camp, adding a new placekicker, and holding its first scrimmage of 2015.

A couple of weeks ago, the entire Lions team traveled to a camp in the middle of nowhere in Centerville. This camp gave the team a chance to achieve several goals, in which the only focus was getting better as a football team. What made this camp unique was since they were in the middle of nowhere, the outside world was cut off.

"The practices were really good, and we came together as a team," CCHS senior Eldon Resko said before the practice on Aug. 6. "Everybody started working together, and I think it was a good experience."

For example, the team was not allowed to have cell phones or watch television, especially since there was no signal in the area. The reason for it is the coaches wanted the players instead of focusing on their own lives but work on the Lions coming together as a team. By the end of camp, both the players and coaches agreed the team building excises both on and off the field worked as CCHS came closer as a team.

"When you do not have your phones and distractions, you start hanging out with your teammates and getting to know one another," Resko said. "We just became friends."

Fellow CCHS senior Brady Page added, "It really did not bother me too bad because we had all of our teammates there. We always have been when we are together."

Of course, the main goal of the camp was the Lions worked on putting everything together as they prepared for the upcoming season. The offensive and defensive schemes, including the plays and formations were given to the players, which they hope will result in continued success this season. Also, the players and coaches worked on finalizing the depth chart and starting lineup since the kickoff to the season is right around the corner.

By the time practice resumed last week at home, the players and coaches felt better prepared for the challenging schedule coming up in 2015. Also, the team spent more time together both on and off the field, which should help this season.

"We bonding together, and we done a lot of our offensive and defensive stuff," Page said. "We really made it out better as a team. Our offense looks a whole lot stronger now after the camp, and everybody came together as a team much, much better."

Also during practice last week, the Lions revealed a secret weapon on special teams. Their new placekicker knows something about kicking a ball, but instead of doing it on the soccer pitch, she will be doing it on the football field with a pigskin. Last year's Girls Soccer Player of the Year, senior Livia Walker, impressed the football coaches and players as she booted several long distance field goals with ease. Her longest field goal was from 45 yards out during practice.

"I did alright," Walker said. "I probably could have done better, but it takes some getting used to in practice."

The Lions finished out the week with a scrimmage on Aug. 7 at home against Sale Creek. The Panthers have only had a football program for three seasons, and they play in Class A.

Both sides of the ball for the Lions played pretty well for their first action against an opponent this fall. The CCHS No. 1 defense did not allow a touchdown during the scrimmage, and they got big plays from several players, including sophomores Alex Clark and Cole Hill, and senior Garett Cook.

"We have really improved since last year," Cook said. "Our defensive line is gang tackling, and we are making sure they do not get the deep pass. We are just improving as a defense."