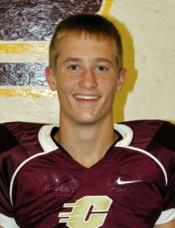 The young Lions continued to take their lumps in a 55-0 blanking at Meigs County Friday (Oct. 7) as the offense failed to sustain drives and the defense was hit hard early before offering more resistence in the second half.

Cannon County (0-8) remained winless but players have not given up on what they are trying to accomplish, if not for this season, definitely the future.

"We do our best and we give effort, but we just aren't getting the results we would like," junior Ryan McLaurine said. "I'm not making excuses, but we do have a lot of young players who are having to learn things in games as they are growing. We just have to stick together and keep working and the future can be good because we have most everyone back. We just have to get through the tough times."

Friday would qualify as some of the tough times.

"Meigs County is a team fighting to make the playoffs and they played like a playoff team tonight," Cannon County Head Coach Joel Schrenk said. "We had made some strides offensively the last couple of weeks and had been doing some good things, but we did not do that tonight. Meigs County had a lot to do with that. They brought a lot of pressure and we didn't respond as well."

Cannon County's defensive players were on the field a large majority of the time as the Tigers used their ground attack to control the clock. McLaurine, Dalton Ryan, Jackson Mason, Thomas Stone and Kyler Walker were the most active Lions and were in on several tackles.

Offensively, the highlights were few. Sophomore quarterback Ryan Jordan had the second-lowest passing total of the season with just more than 100 yards. The previous low was 60 yards at DeKalb County. Cody Petro had another solid night with more than 60  yards receiving. Justin Tobin followed with four receptions.

It doesn't get easier for the Lions as they face unbeaten Smith County in Carthage Friday.

Print
Members Opinions:
joedog
[Delete]
its time for a coaching change wake up admin and help the kids one more year of this and the program will be rock bottom
Ranger
[Delete]
I think the coach is doing a great job! With mostly a team of freshman what do we expect? I would suggest we set a example to our kids and show support as we would want them to do. My son has played mulitple sports in the county and hasn't always like the coach BUT he is the coach and he will show respect to the position.

Joel has mine and many others full support! But you never here the good comments only the bad comments.

joedog
[Delete]
i understand we have a young team but if we continue to lose players like we did this year the program will just continue to go down so this must have something to do with the coaching if good young players donot play i just think a change is needed.
mkjomurf
[Delete]
Ranger i need whatever you are taking.....The coach is playing more upper classman than freshman. I see two who play on a regular basis, 21 and 77 they start. the rest are sophomore and above. The remaining freshman are in and out and usually after it is well out of hand. that is about 10 minutes into the 1st quarter.... So open your eyes and watch the game.....I'm with JOEDOG...we need a coaching change...Ask former student\athletes who have played for him and how much he has helped them? Then you will get the real story of the Coach!!!!!! How do you start out with 50+ on the team and end up with 30+ at the mid point of the season? How do you have all the big kids in 11th and 12th grade walking the hallways instead of on the football field... Go ask JOEL that question and get back to us.....
jj54
[Delete]
Geez ranger,I think you need to share the bottle my friend. The coaching is at the root of the probablem. I did not have the luxury to play for joel but I must say as an Alum this sadens me. but for the record, I would be happy to donate my time when we get a coach with some sense, or even this off season! . . .by the way... I hate to say it but you shouldve keept the old man!
country-girrl
[Delete]
@joedog, you dont even attend the games. You and your family have an agenda. I like how you spout off about the program and its success yet do all you can to sabotage it. It sure is easy to point the finger from behind a monitor. If your agenda is to get your nephew that head coaching job, that is a joke. He has no more ability to motivate than I have to run this country. You all need to take a good look at your characters. Everytime I see a post like yours I think of a quote that was said about this situation..."A fools name and face are always posted in a public place."