Lions Stay Perched In Catbird Seat With Win Over York 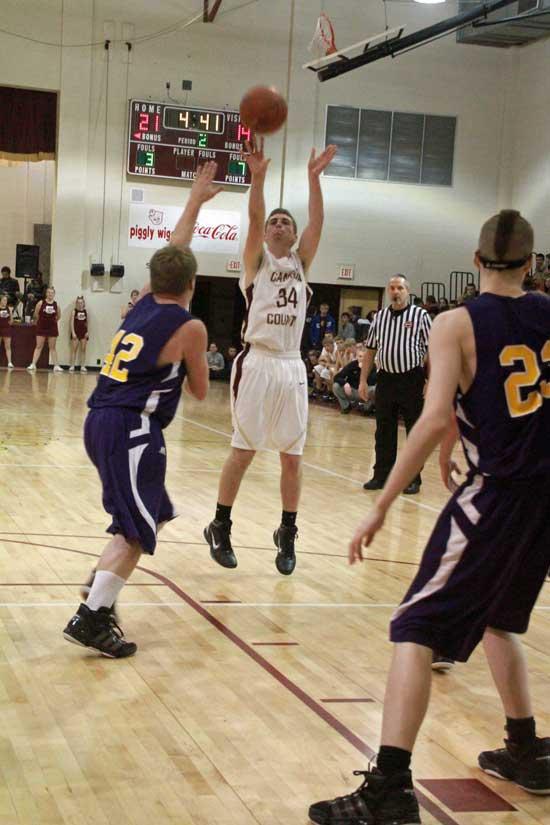 Cannon County's Heath Simons, 34, pulls up for a jumper over York's Jim Winningham, 42, during the Lions' District 8-AA win against the Dragons Friday.
Cody Ruehlen is enjoying the view from the top so much he is accelerating his contributions in a big way to help assure the Lions maintain their spot in the District 8-AA catbird seat as the league race intensifies down the stretch.

Ruehlen scored 20 points in consecutive games for the first time this season, following his 23-point performance at Livingston Academy Monday, with 20 more in a 63-42 win against York Institute at Robert A. Harris Gymnasium Friday (Jan. 28).

Ruehlen and senior classmate Jared Nave were double trouble for the Dragons. The duo combined for double doubles with Ruehlen dominating the game with 20 points and 12 rebounds, and Nave proving to be equally dynamic with 16 points (on 6-of-9 shooting) and 10 boards. It was Nave's team-leading 10th double double of the season.

Justin Davenport was the only other Lion in double figures with 16. He also added six rebounds and four assists as the Lions (17-8, 5-2 8-AA) remained within one-half game of Livingston Academy for the 8-AA lead. The Lions play host to the Wildcats for the top spot in the league standings Friday.

That's a welcome change for the Lions, who are accustomed to looking up at other teams in the standings this deep into the season.

"It feels a lot better than trying to fight your way up, I know that," Ruehlen said. "We have been fighting our way up since I've been in high school so it feels good to be on top."

Ruehlen's recent display of basketball brilliance could go a long way in keeping the Lions on top. He adds a physical dynamic sometimes lacking around the goal and also can step out and knock down shots from the perimeter, creating mismatches along the way.

The only thing Ruehlen has changed of late is his approach.

"I have been trying to be more aggressive and do what I need to do to help the team," Ruehlen said. "This game was very important because you have to defend the home court. All the district games are big and they keep getting bigger."

Cannon County jumped out to an early 14-6 lead against York (1-19, 0-6) and was never seriously threatened, though the Dragons were within eight, 30-22, at halftime.

"Overall, the effort was there and we did some things well, but we still left a lot of points out there in the first half with turnovers and poor execution at times," Cannon County Head Coach Matt Rigsby said. "The good thing is we are doing a lot of things well and there is still time to continue to improve in areas where we need to do that. We will not lose sight of the fact we can continue to get better."

Cannon County is at Tullahoma in non-district action Monday before returning home to face Livingston Academy in a showdown for the 8-AA lead Friday.