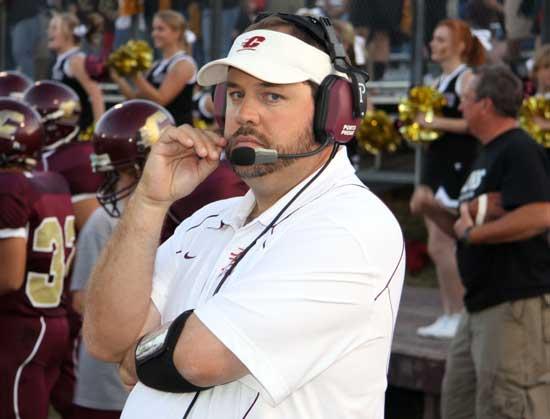 JOEL SCHRENK
Spring football practice at Cannon County, which begins Monday afternoon and runs through May 21, will be filled with competition battles and jockeying for position on the depth chart but more than anything, expect the workouts to be fierce and intense in nature.

Head coach Joel Schrenk believes the Lions developed depth by playing a wealth of underclassmen in 2010 and a majority of the personnel has improved during a productive offseason conditioning. Those qualities should create competitive practices.

Spring is generally for developing players and installing offensive and defensive systems. Lions spring practice will be utilized to develop something more.

"We want to develop some toughness," Schrenk said. "We are looking for new or young guys to step up. We are looking to build on where we left off last year with our returning players and look for those guys to keep working and getting better."

The Lions completed their "Night of Champions" Lift-a-thon last Friday and every player on the roster enjoyed a personal best so Cannon County should feature a stronger, more athletic team in 2011.

The Lions will practice Monday through Thursday this week. They have 15 days to get in 10 practices. The spring game is at Sequatchie County at 11 a.m., May 21.

Cannon County will have to start working to replace heralded running back Gabe Walkup, who rushed for more than 1,000 yards last season, and quarterback Heath Simons. Rising senior Damon Collette and rising sophomore Hawk Love were involved in the offense last season and will be prime candidates to watch this spring.

Rising junior Brandon James and rising sophomore Ryan Jordan are the top quarterback candidates entering spring drills. James is fully recovered from a shoulder injury that prematurely ended his 2010 season and required surgery, but he will not compete in live hitting this spring.

"(James) will get some reps but he will not have contact," Schrenk said. "I think he can handle the contact but there is no sense risking it. I know what he can do and he's a known commodity."

The Lions skill players should be improved all-around. Receivers Justin Weaver and Justin Tobin has demonstrated improvement. In fact, Weaver has had an outstanding offseason. All-Region pick Jordan Linder is much stronger and could be a force for the Lions.

Ryan McLaurine, Dillon Jackson, Thomas Stone and Dalton Ryan will bolster what should be an improved offensive line. Cannon County returns eight players on defense and seven on offense.

Indications are the Lions should be improved but the spring practices will provide a clearer picture of where the team stands heading into the summer.

Print
Members Opinions:
joedog
[Delete]
next time smile coach this season can't be much worst than the last one!!!!!!