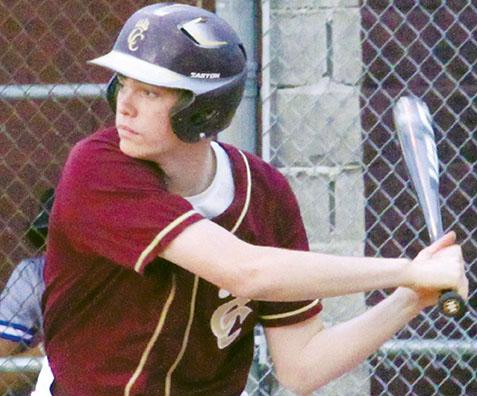 Austin Martin drove in five runs and connected for a grand slam as the Lions split a doubleheader.

By TONY STINNETT Courier Sports Editor
As of presstime, Cannon County had lost to Upperman, 5-1, in the opening game of the District 8-AA Tournament. The Lions were scheduled to face York in an elimination game Monday night.
---
Cannon County’s baseball team closed out the regular season with a split of their league doubleheader against York in Jamestown (April 26).

After losing the opener, Jake Todd gave the Lions a strong pitching performance in the nightcap. Todd went five innings, allowing three hits and left the game with a 5-2 lead.

York appeared to be in position for a sweep when it came back to take the lead in the late innings; however, Cannon County wouldn’t let it get away.

The Lions (8-20-1) sent 12 batters to the plate and scored seven runs in the sixth to take a 12-6 victory.
Austin Martin’s grand slam capped the rally. Martin was 2-for-4 with five RBI. Nick Vassar was 2-for-3 with three runs scored and two RBI.

Tucker Francis was 2-for-3 and Jackson Mason was 2-for-3 with a double and two runs scored.

Cannon County saw its three-game win streak snapped in an 8-6 setback in the opener.

Trent Bragg, Martin and Mason each had two hits to lead the Lions. Francis was 1-for-3 and drove in two runs.
Cannon County trailed 6-1 going to the sixth but rallied in the sixth and seventh to put a scare into the Dragons.
The Lions had a four-run seventh and had the tying run at the plate but couldn’t complete the comeback after a stirring comeback.

The first five Lions reached to start the seventh. Jared Judkins was hit by a pitch and Vassar, Martin, Bragg and Francis followed with four straight base hits.
Mason just missed tying the game with a two-run home run but his RBI double was just short of the fence.