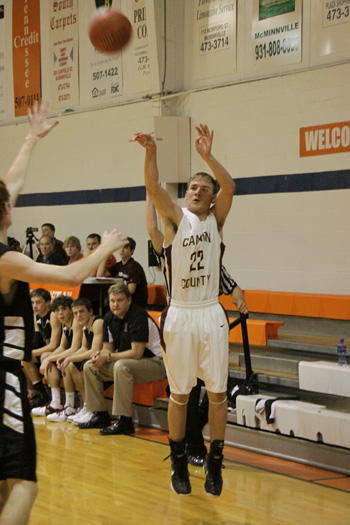 Justin Tobin fires a shot from the wing for Cannon County in action against Merrol Hyde Thursday.

HARTSVILLE – It should come as no surprise that Cannon County is starting to find its offensive rhythm just as junior Justin Tobin is beginning to find his shot.

Tobin knocked down two first-half 3-pointers, his fifth in two games, and Cannon County stormed to an 86-45 win against Merrol Hyde in a consolation game of the Trousdale County Holiday Tournament here Thursday (Dec. 29).

“Tobin’s shot is finally coming back as he transitions from football to basketball,” Cannon County Head Coach Matt Rigsby said. “We are a much better threat with another scorer out there, and Justin gives us that. Sometimes it just takes time to get that back. He was one of our most productive players during the summer.”

The junior small forward only netted seven points against the Hawks but his progress signals a more competitive Lions’ team.

“I do feel more comfortable out on the court,” Tobin said. “Maybe some of it is just getting back in the swing of things, but I feel like I should have been playing better. I know I am capable of doing more than I have so it’s a good feeling to get out here and contribute and help the team win.”

Cory Henley led a balanced Cannon County attack with a game-high 21 points on the strength of five 3-pointers, and Ethan Bryson finished with 12 points and four rebounds in his best all-around game of the season. Matthew Turney and Cody Young tallied eight points each, and Tobin finished with seven.

“We finally hit some shots as a team,” said Henley, who connected for three of his game-high five treys in the first half. “We have good shooters on this team, and coach Rigsby continues to encourage us to shoot even when our shots have not been falling. Shooting can be contagious and it was today.”

Perhaps one reason was the manner in which the Lions shared the ball. When their suffocating defense wasn’t creating easy scoring chances, the Lions were making the extra pass, or penetrating and kicking it out to the open man.

The result was one of the team’s most prolific offensive efforts to date.

“We moved the ball really well and we made the extra pass to free people up,” Rigsby said. “The biggest thing is that we knocked down those open shots.”

Those long-distance shots also opened up the inside attack, where Bryson feasted on the Hawks’ post players. The junior post was 5-of-5 from the field and had his most productive action.

Cannon County’s defense was sloppy during its first-half offensive fireworks. Although they had scored 45 points in the opening half, they also allowed 31 and led 14 at the intermission.

The Lions corrected their defensive woes in the second half. They continued to surge offensively, mainly going inside to do the second-half damage, but they also made things difficult for Merrol Hyde.

“We made some defensive adjustments at the half and the kids did a great job of executing those adjustments,” Rigsby said. “We are playing better as a team. We just have to continue to make strides.”