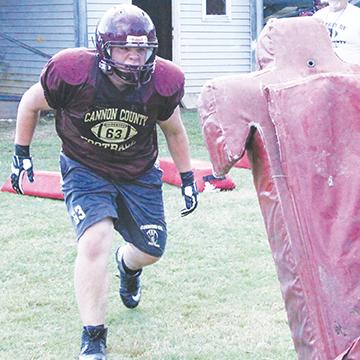 Football players at Cannon County thought they knew one another.

After this week, they really will.

The Lions are spending this week at Camp NaCoMe in Pleasantville, Tenn., just outside of Centerville. Mention camp to most high school students and thoughts of swimming, fishing, or summer Bible camp or others come to mind.
There will be no such pleasantries awaiting football players from Cannon County.

This camp is all about football. It is designed to be four days and four nights of nothing but eating, breathing and sleeping thoughts of gridiron glory.

Getting closer and developing team chemistry; however, is at the top of the list of things to accomplish during this brief, but important, getaway.

"Chemistry is the big thing," said senior lineman Jake Duggin. "Becoming better teammates is important. As far as football we can get everything done here (at CCHS) but once you push the world out and just allow it to be football and team, then chemistry becomes a lot better."

Lions second-year head coach T.J. Daniel exposed his players to the rigors of Camp NaCoMe last year. He expects this summer's foray to be much more productive in all areas.

"Last year it was somewhat of an unknown for all of us because we had not done this before," Daniel said. "This year we know what we are going to accomplish and the kids know what to expect also. The whole point of camp is to start working together as a team and go through things other don't. There are no distractions. It is just the players, coaches, support staff and football. This allows our players to focus on football for four days and get to know one another better."

Maturity should help the Lions as they go away to try and become better. More players who have been in the program should enable leadership to provide an example and sense of urgency.

"I believe we are accountable now, we are more mature," said junior Bo Bryson. "We have older players this year and that helps. We hold ourselves and one another more accountable. When we return from this camp we should be a better football team. We have to focus on what the goal is."

Camp is not just about chemistry.

It's also about players getting on the same page in terms of offensive and defensive schemes.

Cannon County's offensive line appears to be much bigger and most of the players set for action have been in the trenches before. Becoming a more fluid unit is the key now. Players such as Duggin, Daniel Davis, Terry Parker, David Fonoti, and Maika Fonoti are among linemen who bring experience to the front five.

"I think we are a better blocking team," Davis said. "Coach (John Robinson) is helping us a lot. I think he has us doing the right things. If you don't have a strong front five you are not going to move the ball or have success running or throwing it. Overall, I think our group is better and we are working harder."

Senior Wilder Mankin said understanding how to practice is also important.
"We have to practice with a purpose, focus and get things done," Mankin said. "We also have to be smart with our practices. We don't have a lot of depth so that's important. We are working as a team. This camp should make us even closer."