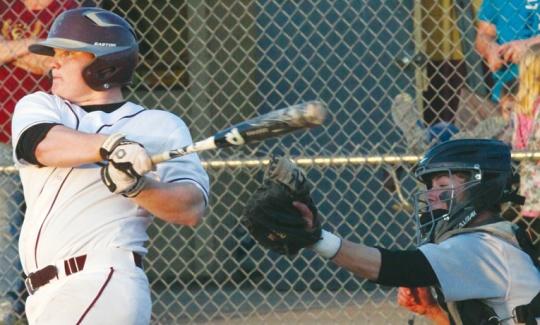 MURFREESBORO - Cannon County’s offense was dormant for sixth innings but the Lions roared back with a convincing seventh inning to stun defending champion Smith County, 3-2, in the first round of the District 8-AA Tournament at StarPlex here Friday.

Trent Bragg started the three-run uprising with a double and Chase Gunter’s two-run single capped it as the Lions (9-20-1) won their first 8-AA tournament game in four years.

They did it against the reigning 8-AA Pitcher of the Year - Jordan Craighead.

“It was a team win in every sense,” Cannon County coach Tony Stinnett said. “We had outstanding starting pitching, solid relief work and timely hitting, along with steady defense. That’s what it takes at this time of the year and these guys delivered.”

Trailing 2-0 and facing its final at-bat, Bragg drilled a leadoff double to start the inning. Jared Judkins replaced Bragg as a courtesy runner. Brent Duggin followed with a walk and freshman Tucker Francis was called upon to advance both runners via bunt, which he did successfully.

Jake Todd legged out an infield hit, scoring Judkins to pull the Lions to within 2-1. Todd stole second and Gunter, down to his last strike, delivered a two-run single to give the Lions a 3-2 lead - their first of the game.

Strang was called upon to finish the game. He allowed a leadoff single and, following a bunt, struck out the No. 3 and 4 hitters on seven pitches to earn the save.

Bell was outstanding in his start. He gave up single runs in the third and fifth innings.

“That was a lot of pressure for a freshman and Graden came in and did what he always does,” Stinnett said. “Dalton was outstanding and he did a good job of keeping the game in reach. Trent threw out two runners and we turned two double plays.”

The Lions were scheduled to face Central Magnet Monday at 6:30 p.m.